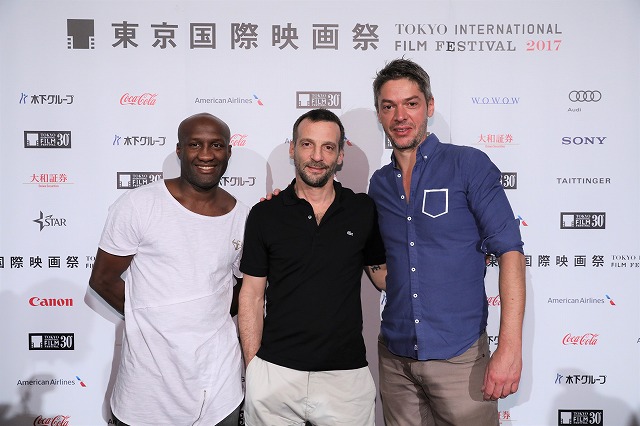 Boxing movies are more than just a cinematic subgenre. They’re practically a culture unto themselves, and Samuel Jouy’s debut feature, Sparring, screening in TIFF’s Competition section, is an attempt to subvert the genre while also adhering to most of the tropes that make it so popular.

Mathieu Kassovitz plays Steve Landry, a 45-year-old French middleweight with 49 fights under his belt, 33 of which he has lost. Though Steve is almost the definition of a palooka (an inferior prizefighter), he loves the game too much to want to quit, and thus has accumulated more real-time experience than almost anyone he knows in the sport. That, of course, counts for nothing in terms of competition, and Steve is generally inarticulate about anything except boxing, especially around his wife, Marion (Olivia Merilahti), and their two young children. They adore him, but can’t quite understand why he’s still taking punches and coming home at night with a bloody nose and bruised eyes. Of course, Jouy’s point is that for every winner there has to be a loser, and this is the story about “that guy,” as Jouy put it during the post-screening press conference on November 2.

But Sparring wouldn’t be a boxing movie without redemption, and Steve, in order to make a little more money for his family, begs a former champ, Tarek M’Bareck (Souleyman M’Baye), who is trying and win his title back, to hire him as a sparring partner. Tarek laughs at this “old man” and tries to dismiss him, but Steve won’t back down. Eventually, the two fighters come to a kind of understanding of each other’s strengths that requires a bit more attention from your average boxing fan. As Steve says, Tarek knows how to win, but he doesn’t know how to lose, and Steve can teach him that. In the end, of course, Steve gets his chance at redemption, and Jouy and Kassovitz come up with a cinematic KO.

“I’ve always liked boxing as a sport and boxing movies as films,” the writer-director said when a reporter asked why he chose this subject for his first feature. “And I wanted to look at the idea of failure in our culture, which is not what it seems. I don’t think Steve’s a loser, but we always divide people into winners and losers. Steve thinks he’s success, because he’s doing what he loves to do. The thing is, in life you keep going regardless of what happens to you, and that’s what I wanted to show.”

M’Baye, who in real life is the 32nd WBA super-lightweight champion, said that he relived his life as a champ through the film. “It’s very realistic. Steve is a sparring partner, and I have to tell you that sparring partners are essential to a champion. You need confidence, and that’s what sparring gives you.” As the movie repeatedly shows, boxing is as much about psychology as it is about strength and stamina.

One eager reporter gave a very long-winded analysis of the movie’s score, which blends classical music with moody downbeat electronica, mostly provided by Merilahti, whose day job is as a musician. Jouy acknowledged that he paid close attention to the music because, “it’s often difficult to express the soul through purely visual means. It was my intention to connect the music directly to the action in order to express how different characters were feeling.”

Kassovitz, whose striking visage is perfect for the over-the-hill boxer, was mostly silent during the press conference, and the press materials mention that the actor is actually trying his hand at the sport. But he insisted that he isn’t that good. “Of course, if you’re going to play a boxer, you have to train hard as a boxer,” he said. “And, obviously, you’re not going to be very good. But in this case, not being very good was the point. Still, you have to do your best.”

One reporter was impressed by the tattoo on Steve’s back, which reproduces an M.C. Escher lithograph, and wondered what it signified in the movie. Kassovitz waved his hand and laughed. “It means nothing. It’s my own tattoo, and, as you know, you can’t remove them.”