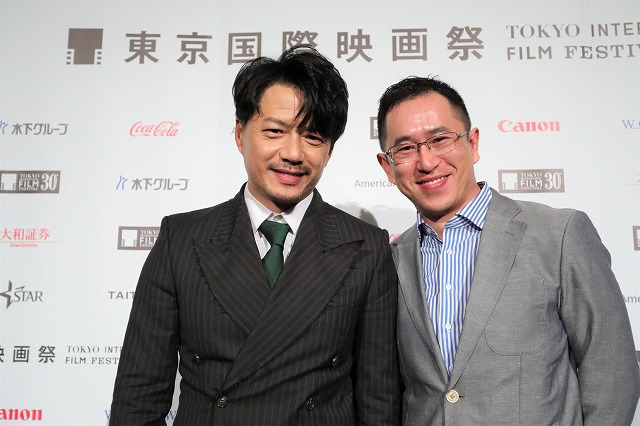 The Chinese film The Looming Storm, screening in TIFF’s Competition section, has a misleading title. Set in a dreary factory town in the late 1990s, the movie is drenched in bad weather. Almost every scene takes place during pouring rain, and while it starts out looking like a conventional serial killer thriller, it zigs and zags through several potent themes and ends up in a wholly unique place.

Yu Guowei (Duan Yihong) is an earnest security officer for a large regional factory, and when a series of grisly murders targeting young women occurs in town, he offers his services to the local constabulary, since he is eager to become a police detective himself. The chief inspector, Zhang (Du Yuan), a bitter man who has been exiled to this waterlogged province, isn’t too keen on the younger man. But he sees where Yu might be of help and discloses a few facts central to the case, enough to drive Yu into an obsession to find the murderer himself.

During the post-screening press conference on November 1, one reporter remarked on the film noir aspects of the mise-en-scene and asked the director, Dong Yue, if the genre was popular in China. The question opened a can of worms that needed airing. Dong didn’t particularly know or really care if film noir was popular in China, because his purposes were more complex. He cited as his main influences two American psychological thrillers, Alfred Hitchcock’s Vertigo and Francis Ford Coppola’s The Conversation. They provided inspiration in terms of the kind of atmosphere he was aiming for, although in truth, the movie that The Looming Storm most resembles is the South Korean thriller Memories of Murder (Bong Joon-ho, 2003), especially with regards to its thematic and plot particulars. The film opens with the body of a butchered woman in a field, the main character routinely abuses his suspects, the murderer keeps escaping the clutches of the police, and in the end, the resolution is deceptively beside the point.

Like so many other Chinese films of the last two decades, The Looming Storm is really about the changes that China’s booming economy has brought to people’s lives at the micro-level. The film progresses over a long period of time, during which there are massive layoffs at the factory and the town undergoes a sea change in terms of prosperity. The murders are simply a factor in these changes, although their effect on Yu is catastrophic. He becomes close to a young bar hostess, Yanzi (Jiang Yiyan), and helps her set up a beauty parlor, but their relationship remains aloof because he sees her as something other than a potential lover.

“This issue was important to the concept of the film,” said Duan. “And it was a problem I had to solve in order for the movie to make sense. If this were a European movie, I imagine the two characters would act more normal sexually. After all, any man would be attracted to such a beautiful woman. But that is not Yu’s main desire in life.”

In the end, the question of “who did it” becomes less vital, mainly because the viewer comes to understand that by taking Yu’s point of view throughout, the narrative itself is suspicious.

“The original script was quite different,” said the director. “Initially, it was about a man who revisited the factory where he worked years before, but then I changed my mind. What I really wanted to do is explore the meaning of truth. In the end, when Yu does visit the factory after it’s been long closed, he meets an old man who used to work there and he doesn’t remember Yu at all. Does that mean Yu’s story is false? Actually, it just means there are many truths to a story, which is not a bad thing. You need to be suspicious in order to really know the world.”