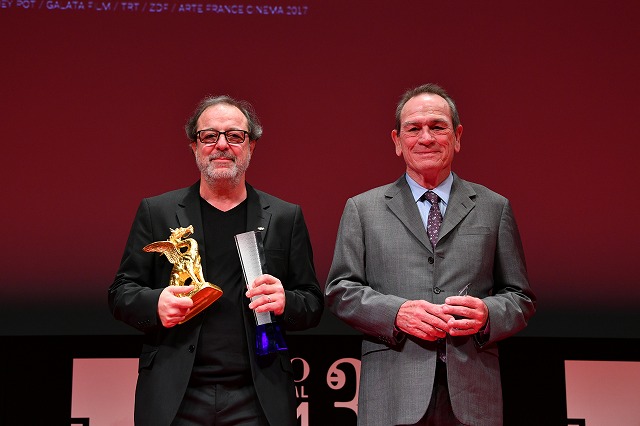 The 30th Tokyo International Film Festival has wrapped with a Closing Ceremony centered around award-winning films and speeches that celebrated international communication and the hope for a brighter, greener future.

The ceremony kicked off with the announcement of the four winners of the first-ever Tokyo Gemstone Award, created to honor up-and-coming actors and actresses: Mayu Matsuoka (Tremble All You Want), Shizuka Ishibashi (THE TOKYO NIGHT SKY IS ALWAYS THE DENSEST SHADE OF BLUE ), Adeline D’Hermy (Maryline) and Daphne Low (AQÉRAT – We the Dead). Ishibashi, a contemporary dancer who has received praise as one of Japan’s most promising young actresses, and Low, who also appeared at the 27th TIFF representing the film River of Exploding Durians (by Edmund Yeo, the director of AQERAT), were on-stage to receive their awards, while Matsuoka and D’Hermy joined the audience via video greetings.

Ishibashi, whose first leading role was in this year’s THE TOKYO NIGHT SKY IS ALWAYS THE DENSEST SHADE OF BLUE, thanked the festival and expressed her appreciation for being selected alongside the other three actresses.

Low cited her appearance at the 27th TIFF in receiving her award, saying, “I feel like my destiny is intertwined with the festival.”

The announcement of main-category winners began with the Japanese Cinema Splash Best Picture Award, which went to the section’s only documentary, Of Love and Law, the tale of a gay couple who run a law firm and fight for the right to raise a family. The award was accepted by director Hikaru Toda, who remarked, “The subjects of the film are watching eagerly on YouTube, so it’s nice to be able to share this moment with everyone.”

Next, the ceremony moved on to the Asian Future section. Jury members were clearly impressed by Passage of Life, the film about a Burmese family living in Japan, directed by Akio Fujimoto. The director was awarded The Spirit of Asia Award by the Japan Foundation Asia Center, while the film itself won the Best Asian Future Film Award. Said jury member Nick Decampo: “This film captures the delicate balance between reality and fiction.”

When accepting the latter award, Fujimoto, a first-time director, was joined on stage by the family who appeared in the film, all of whom were non-professional actors, and said, “I’m happy we were able to make this film in cooperation with Japan and Myanmar.”

Jury member and film director Isao Yukisada added that because of the jury’s passionate discussion, they ultimately selected another film for a Special Mention — first-time director Zhou Ziyang’s Old Beast. Jury member Oh Jungwan praised the film for its portrayal of modern Chinese society, while the director, accepting the award, recalled a touching moment he had with a viewer of the film at the festival, who was so moved, she merely handed him paper for an autograph.

It was then on to the main event: the winners of TIFF’s Competition section. The first announcement was for the Audience Award, which went to Japanese feature Tremble All You Want. Director Akiko Ooku said: “This film was shot in a very short period of time with a tiny crew, so I really didn’t expect this. It feels like a dream come true to be even nominated, let alone win.”

Next came the Best Screenplay Award by WOWOW, presented to Finnish thriller Euthanizer. The award was accepted by the film’s producer, Jani Pösö, who thanked the jury on behalf of director and screenwriter Teemu Nikki, joking, “Teemu and I usually co-write our films. This is actually the first film he wrote without me, and he won an award right away!”

The award for Best Artistic Contribution went to The Looming Storm, the film noir set in a Chinese factory town in the late 1990s. Dong Yue, the film’s first-time director, was quite emotional as he remarked, “It was thanks to the excellent performances that I was able to make a film I can be proud of.”

That remark seemed almost prescient, as the next award, the Award for Best Actor, was announced for The Looming Storm’s lead actor Duan Yihong. Jury member Zhao Wei, who made the announcement, said “Deciding on this award took us the least amount of time. It was an excellent performance.”

Yihong commented: “Making a film depends on the hard work of the entire team, and I want to thank everyone who helped create it.”

The winner of the Award for Best Actress went to Adeline D’Hermy for her performance in Maryline. D’Hermy, currently on stage in Paris, joined the ceremony via video message, saying, “I’m glad Maryline was able to reach out to the hearts of the audience.”

The Award for Best Director went to Edmund Yeo of the film AQÉRAT (We the Dead), who came to the stage emotionally, joking, “I’m not crying, I’m sweating.”

Yeo went on to thank his small crew, who he referred to as his “AQÉRAT family,” and TIFF, stating, “I sometimes think filmmaking is a lonely endeavor, but then I come to film festivals and realize we’re all connected by our love of cinema.”

Next came the Special Jury Prize, which was awarded to Italian film Crater, directed by Silvia Luzi and Luca Bellino. Co-director Luzi expressed surprise at winning, saying “We shot with a very small crew — actually, just the two of us up here right now.”

Finally, the Competition’s highest honor, the Tokyo Grand Prix Award, was announced, going to the international sci-fi co-production Grain, directed by Semih Kaplanoğlu. In awarding the prize to Kaplanoğlu, jury president Tommy Lee Jones said, “We were impressed by this movie’s appreciation of the common understanding among all people through a shared mythic experience.”

Kaplanoğlu was also lauded by Governor of Tokyo Yuriko Koike, who presented him with the Governor of Tokyo Award and Kirin trophy, and the Director of SEIKO, Hiromi Kanagawa, who gave the director a SEIKO ASTRON watch.

Kaplanoğlu said the message of the film, which deals with environmental issues, is that humanity must ask “where we came from and where we are heading. The power of film helps us ask these questions.”

With the awards section of the ceremony complete, Governor Yuriko Koike congratulated Kaplanoğlu and the rest of the festival’s filmmakers while wishing TIFF and its participants continued success, stating: “It’s great to see filmmakers with outstanding talent starting their journeys at this festival.”

Tommy Lee Jones then shared his own thoughts on the 30th TIFF. He praised his fellow jury members, calling them “very bright filmmakers and thoughtful people.” He also noted they had a very international mix, saying, “we speak five different languages and needed five different interpreters… it felt like the United Nations! But we’re more humorous than the United Nations.”

Jones also laid out his final feelings about TIFF and the jury’s final selections: “Festivals, at their best, are meant to relieve filmmakers and audiences from strict commercial demands,” and said, “As filmmakers, we have not been born and raised to waste your time, we have been born to improve it — and I know that I can speak for this jury when I say we remain your humble and hopeful servants.”

Finally, Jones called to the stage the star of the Closing Film, An Inconvenient Sequel: Truth to Power (and his college roommate), former Vice President of the United States Al Gore, who entered to rousing applause. The environmental activist thanked the festival for “reuniting me with my lifelong friend” and shared a few words about the Closing Film, stating he hopes viewers “feel it as a challenge personally to become part of the solution to the climate crisis.”

Gore was then joined by Governor Koike for a short talk, in which they discussed the steps Tokyo is taking to reduce carbon emissions in the lead-up to the 2020 Olympics and Paralympics.

Finally, the ceremony was wrapped up by TIFF Festival Director Takeo Hisamatsu, who thanked the filmmakers, jury members, “governmental officials, 39 partners, 390 volunteers and participants coming from across the globe” for the success of the 30th Tokyo International Film Festival, which screened a record 231 films and attracted over 60,000 people during its 10 days.