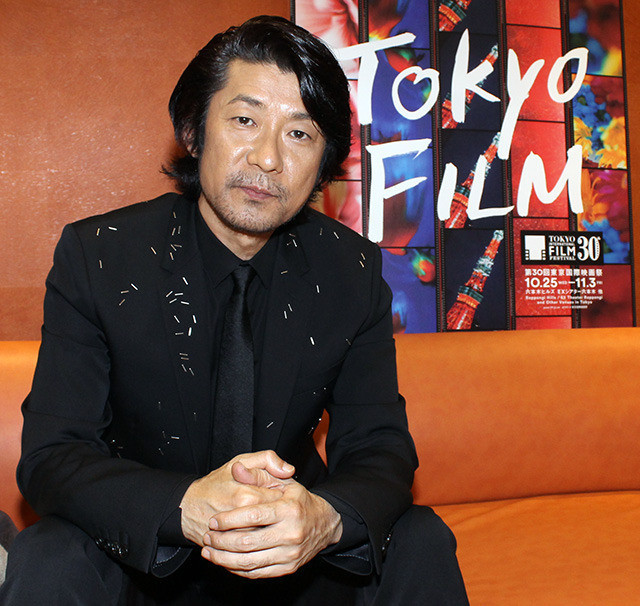 The actor, Masatoshi Nagase, completed serving the member of Competition Jury of the 30th Tokyo International Film Festival. With a sense of relief for completing the important duty as a “Japanese Representative”, he said, “I became to like the movies even more.” He revealed about a significant result achieved with his first experience.

Because he was used to be in the position of being judged, he became puzzled and hesitant when he was requested to take the post; but has begun to think that, “I have reached the right age to soak in the experience of seeing the film from the opposite side at least once.” In addition, this edition of the festival being the 30th milestone was quite timely for me. The first Young Competition Award which was the equivalent of Grand Prix was given to my highly respected director, Shinji Somai’s “Typhoon Club”. I felt it was truly a serendipity and made the decision.

Of course, it was first time for me to see the 15 films with a sense of purpose within a short span of time. “I truly understood the feeling of the creator. Just being nominated for the competition was a wonderful thing and I deliberately ceased to think of them as peers and enjoyed the film as a fan and judged the film based upon how much my heart was moved by it.

“I became truly aware of the seriousness of matter from the first day,” he said looking back at the past events with a wry smile. The suggestions made by an American actor and the President of Jury, Tommy Lee Jones became a significant help. The idea was to hold a meeting after watching each film. It was a nice idea. Everybody watched each film seriously and debated. It was such an amazing experience. Although it took a long time and there were times when we were behind our schedule. “I believe it worked because Tommy’s leadership was good. Our President of Jury was a wonderful person.”

As a result, all awards were decided almost unanimously including the “Grain” which won the Grand Prix. “I was prepared for a great battle that would continue to the morning but what everybody had in their heart was alike. Although we were viewing the film in the same space and were seated randomly; I really felt like we were alike. If we had more prizes such as Cinematography Award or Art Direction Award, then every title of the participants may have received the prize. That was how good it was,” he revealed the sense of fulfillment.

At the closing ceremony, Mr. Tommy Lee Jones said, “We have created a bond between the jurors.” Nagase also stood on the stage with various thoughts in his mind, “Because we were together every day, we really created the bond between each other. It made me sad when I thought that we will not be able to see each other for a while. I also became happy when I watched the faces of the prize winner. I felt conscience about the responsibility.”

In addition, “All others excluding myself had experiences as a director. I wanted to become an actor that all of my peers in the jury will like to use,” he showed his powerful desire with touch of humor. And the thought that recurred was that the film was for the audience.

“When I heard that the theaters were screening the films other than the competition and was packed with the audience, I was happy. As Tommy said, I must try to create films that wouldn’t waste the time of the audience. That effort results to the nomination and the awards; that is why we shouldn’t neglect it. I should have realized this earlier, but I really felt thankful for being invited.

Nagase wouldn’t be immersed in the reverberation of the film festival too long. He will be participating in the Director Naomi Kawase’s film “Vision” with Juliet Vinoche, which will be his 3rd consecutive film with Director Kawase.

The experience as a jury will be a positive strength for his future indeed.