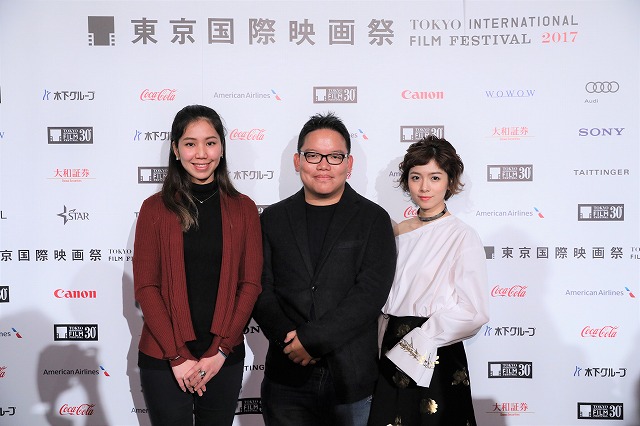 Malaysian director Edmund Yeo doesn’t come across as your average arrogant filmmaker. During the November 2 press conference for his TIFF Competition entry, Aqerat, he emphasized that he is “not a dictatorial director,” that he solicits input from everyone involved in his films, and that this spirit of openness, of inclusion, is actually the theme of the film, which is both a social critique and a highly stylized portrait of personal suffering.

Daphne Low plays Hui Ling, a young Malaysian woman who works in a rural restaurant and is saving money to move to Taiwan, where she hopes to study and make a better life for herself. Her roommate, Qi Qi, is a bar hostess in thrall to her thuggish boyfriend, and one day Hui arrives home to find her savings gone, with Qi Qi and the thug gone as well. Desperate and angry, she becomes despondent at work and her boss suggests that she visit a man he knows who will pay well for certain services. So Hui Ling goes to see him. This man traffics in refugees, and Hui basically becomes his assistant in the subjugation of vulnerable persons. When boatloads of people arrive, those who don’t pay their fees are beaten or worse, and Hui is expected to document these atrocities. At first resistant, after receiving a few beatings herself — and recognizing how much money she can earn — she becomes numbly complicit.

It’s understood that most of these refugees are members of the Rohingya minority of Myanmar, which makes the movie particularly topical at this point in time. One reporter brought this up during the press conference, saying that, in Japan, news about the Rohingya is sketchy at best, but the movie brings home their plight in a particularly powerful way.

“For the last few decades, Malaysia has received refugees from all over —Vietnam, Cambodia — but for the most part, we didn’t really care about them,” said Yeo. “We had our own problems, and as the movie shows, many Malaysians themselves want to leave Malaysia to find a better life. But recently lots of dead bodies have been found all over, and they are Rohingya. We have to face up to our responsibility in this tragedy. It’s our problem now. So I met with real refugees and NGOs to find out about the situation. I didn’t want to exploit these people, I wanted to be truthful about their plight.”

What makes Aqerat different from films with similar themes is its almost dream-like atmosphere. The first half, which deals with Hui’s predicament, is mostly straightforward narrative filmmaking; while the second half is told mainly from the point of view of Wei (Howard Hon Kahoe), a hospital orderly who falls in love with Hui and helps her escape from her murderous employers. But the tone of this last half is completely different, more akin to the feeling created by Thai auteur Apichatpong Weerasethakul, though Yeo is more conventional in his romantic suggestions. The ending is particularly enigmatic, punctuated by a poem that was written by Low herself.

“When I received the script, it was in English and mostly just paragraphs of exposition,” said the actress. “We had a workshop before shooting started and developed the dialogue together. I suggested this poem and the director adopted it in the scene where Hui and Wei are being pursued by Hui’s boss. But you have to realize that this scene was made up on the spot. We were just following our instincts.”

The ending, which is both beautifully moving and frustratingly ambiguous, was, according to Yeo, inspired by the Chilean writer Roberto Bolaño, a revelation that had the interpreter (and press) scrambling to Google the nam.

“I was really moved by Bolaño’s book “The Savage Detectives,” and I wanted to include something of it,” said the director. “I wanted to create something that would linger with the audience after they left the theater.” When a reporter asked to clarify the fate of his protagonists, he hesitated. “I think of my characters as real living people, so of course I want them to survive, but in truth I don’t know. I just wish refugees and everyone didn’t have to suffer.”