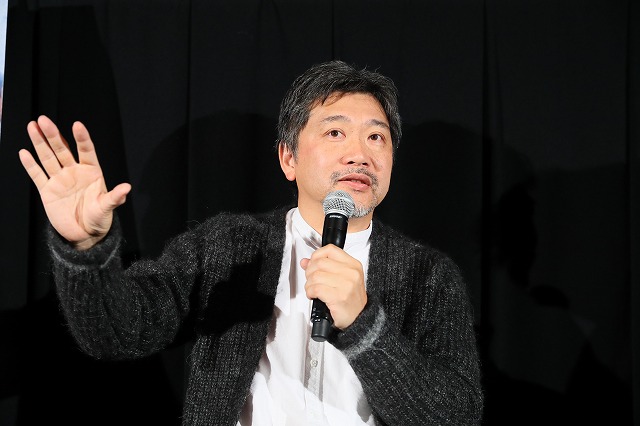 The film has been out in Japan for months, but that didn’t stop fans from packing the theater on November 1 for a screening of Kore-eda Hirokazu’s courtroom drama The Third Murder in TIFF’s Japan Now section.

The large crowd was no surprise: if seeing the acclaimed film with English subtitles weren’t enough, the deal was also sweetened by a chance to hear directly from the director himself, during a post-screening Q&A session.

The Third Murder is the story of an admitted murderer (Koji Yakusho), the defense attorney (Masaharu Fukuyama) who is attempting to reduce his sentence from capital punishment to life in prison, and a young woman (Suzu Hirose) wrapped up in the conflict. What initially seems like an open-and-shut case takes on deeper dimensions as Yakusho’s character continues to change his initial story, leading those involved to question the justice system and the very meaning of truth itself.

The subject matter of the film is a new direction for the acclaimed director, who is best known for family dramas such as Nobody Knows, Still Walking and Like Father, Like Son, which also starred Fukuyama. The first question put to Kore-eda after the screening was whether he himself feels like this film is something totally new or an extension of his previous work.

“The melody and instruments may be different, but I’m still singing with the same voice,” said the director, continuing, “For the last 10 years, I’ve done films that take place within the family, but now I’m interested in opening up my perspective and taking a look at society.”

Much of the film takes place in courtrooms and lawyer’s offices, and cynically depicts the justice system as less interested in getting to the truth than in quickly handing down verdicts, which seem almost pre-ordained. As one character says, it’s as if “everyone is play-acting.”

Still, Kore-eda said, the film wasn’t intended so much as a criticism of the justice system as of human behavior in general — how we “just decide something is the truth without really looking into it.” And he added, “I wanted to portray that scariness.”

One audience member asked about Kore-eda’s on-set method, since the director is known for changing the script during shooting. Kore-eda explained that because he is the writer, director and editor of all his films, it’s relatively easy for him to change things on the fly.

He went on to explain that he thinks of writing, shooting and editing as part of one simultaneous movement, and if they’re linked up, he can take advantage of interesting things that happen during the making of the film. In the case of The Third Murder, Kore-eda was able to observe the lawyers who were on set to provide guidance, and ended up incorporating the way they talk into the script as the film went on.

But the biggest example of this flexible filmmaking method occurred during the editing process, when Kore-eda decided to remove Fukuyama’s final courtroom scene to make the ending of the film more ambiguous.

“I reached that conclusion quite late, the day before the film was supposed to be finished,” admitted Kore-eda.

The change also meant removing a difficult scene for Fukuyama, in which the actor had to perform pages of dialogue all in one continuous shot.

“But after he saw the completed film, he sent me a text message and said ‘It’s great like this, don’t worry about me.’ I feel really grateful,” said the director, who then teased that the alternate ending might make it to the home video version, causing the entire audience to break out into applause.