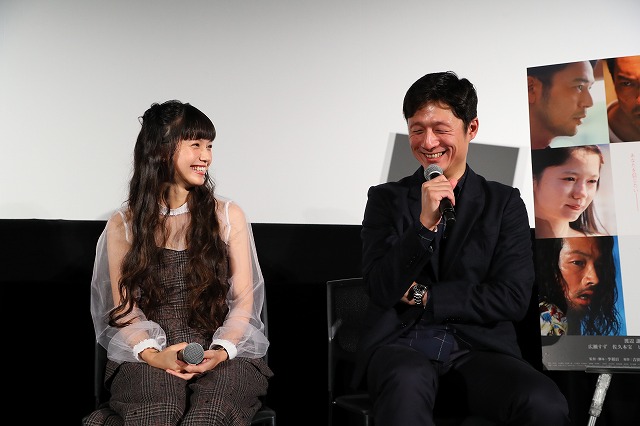 A man murders a married couple in their suburban home, and scribbles on their walls in blood an ominous clue: ikari, the Japanese character for “rage.” The police issue a warrant for the arrest of a man named Yamagami, but little progress is made in the case until three drifters emerge a year later, each seeming to fit the description of the wanted man.

Closeted salaryman Yuma (Satoshi Tsumabuki) encounters the nervous Naoto (Go Ayano) in a Shinjuku bathhouse, and becomes so attached to him that he invites him to live with him. Yohei (Ken Watanabe) saves his daughter, Aiko (Aoi Miyazaki), from life as an exploited sex worker, and as she readjusts herself to her new life in Chiba, she starts a relationship with the brooding Tashiro (Kenichi Matsuyama), who has just arrived in her seaside town. Finally, charismatic backpacker Tanaka (Mirai Moriyama) is squatting at a former war bunker on an uninhabited Okinawan island, where he befriends teens Tatsuya (Takara Sakumoto) and Izumi (Suzu Hirose). As the three men attempt to grow comfortable in their new lives, TV police reports reveal more details about Yamagami, and our suspicions grow that each of the mysterious drifters could be the murderer.

In a Q&A following a screening of the film on November 1st in the Japan Now: the Muses of Japanese Cinema, actress Aoi Miyazaki — one of the four muses — and writer-director Lee Sang-il answered audience questions about the dramatic 2016 hit.

Rage is an ensemble piece, and Miyazaki said she cherished the opportunity to work with a diverse and talented cast and crew. “Encountering the character of Aiko was significant for me, though encountering director Lee and Ken Watanabe, who played my father, was more important,” said Miyazaki. “I experienced Mr. Watanabe’s sense of presence in person for those two weeks on set, and I had many conversations with Mr. Lee. There were lots of moments of silence on set as well, but that atmosphere is something that I think was a big asset for me.”

Aiko is an emotional figure, and Miyazaki said getting into character proved challenging. “I’m a completely different person than Aiko, so I didn’t know if I had it in myself to pull off the role,” she said. “A month before the shoot, I started to regret taking on the role and doubted my abilities. I wasn’t able to latch onto anything regarding Aiko, even when I was rehearsing my lines.”

Wearing Aiko’s flower ornament helped Miyazaki understand what kind of girl Aiko is, though she says there were parts of the character that remained enigmatic. “On set, I was able to absorb the role little by little, but I’m still not sure if I was able to completely understand her by the end of the shoot,” she said.

Lee offered some perspective on why he chose Miyazaki for the role. “Ms. Miyazaki says she is very different than Aiko,” he said, “but there is a link between the two that is most important. Actresses are human beings like any others who live their own lives, maybe have regrets, and also conceal those regrets. People have different ways of facing their pasts. But I believe Aiko and Ms. Miyazaki are similar in that they are willing to face their pasts, and retain a sense of their selves despite experiencing difficult times. So I wasn’t worried about Miyazaki’s ability to play the role.”

However, the director joked, “The only thing I was concerned about was that she might run away from the set.”

Though Miyazaki is still young, she has already played a large number of roles in film and television, with comedy being the most challenging. “It’s most difficult to make people laugh for me,” she said. “I once played a manzai comedian, and realized how hard it is to make people laugh.”

Going forward, the actress said she wants to take new opportunities as they come. “I’m not the type to think much about the future,” reflected Miyazaki. “But I don’t really look back on the past much, either. I’d like to live my 30s one step at a time. Lately, though, I’ve had a desire to take on new challenges, work included. It’d be nice to encounter experiences I have not had before.”