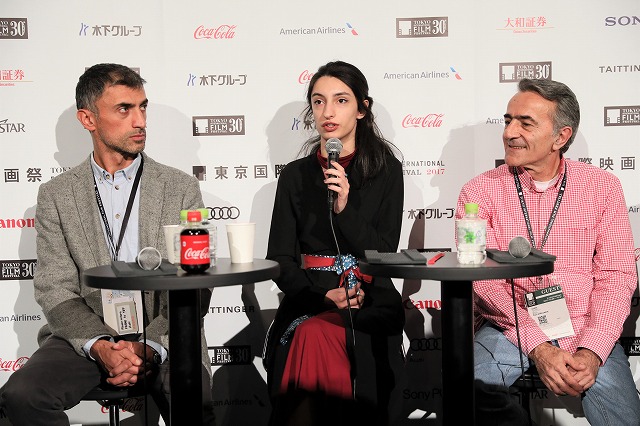 The Georgian-Lithuanian co-production, Namme, screening in TIFF’s Competition section, wears its mystery with a certain pride. In the beginning, the viewer has no distinct bearing, as a life of nature-based ritual unfolds in a mountain village. An old man, Ali (Aleko Abashidze), is the keeper of a spring whose waters are blessed by a white fish that seems to impart special powers. His only companion is his young daughter, Namme (Mariska Diasamidze), a reticent girl whose every movement imparts a sense of her serious obligation. In a way, she seems better attuned to the mystical nature of this vocation, and blends into the misty beauty of the environment, which is threatened by the modern world, as embodied by a hydropower station being built downstream.

Writer-director Zaza Khalvashi merges the sensual with the superstitious in intriguing ways, and in the end, the healing properties of the water don’t seem so otherworldly. Ali’s sons have left for the larger world — one is an orthodox mullah clergyman, one a priest and one is a scholar, and yet they still have faith in their father’s “job,” as he calls it. But they just don’t want to tie themselves down to it. Namme does, and though she betrays a certain resentment, she fulfills her responsibilities stoically, and in the end, tragically.

During the press conference following the screening on November 1, Khalvashi explained that the film took 5 years to make and that it constituted “an exhibition of my soul.” He stressed that the movie is not a fantasy, despite the occasional magical-realist touches. “This is the reality in some parts of Georgia,” he said. “We didn’t make it up. People still live this way, and all we did was bring in a camera and try to put it on film.”

Nonetheless, the movie was scripted and all the characters are acted. Diasamidze, whose enigmatic presence in the film carried over to the press conference, told the assembled reporters that she herself helped write the character of Namme. “I wanted to find out why she was like this,” she explained. “I made up a history for her. I had questions about her and tried to answer them in my performance. And the more answers I got, the more I became her.”

The producer, Sulkhan Turmanidze, said he was delighted that Namme could have its world premiere at TIFF, because he felt that Japanese viewers “were an exceptional audience for this type of film.” During the previous screening, he had appreciated how the audience “understood the purpose and the aesthetics of the film. They discovered the beauty inherent in the story and the film itself.”

Nevertheless, certain cultural aspects seemed to perplex some audience members. One asked about the three sons who had moved away, and a song they sang in perfect harmony, a kind of filmic non-sequitur, considering how accomplished and beautiful the song was.

“That’s a traditional song,” Khalvashi answered. “It existed before the movie was made, before religion came to Georgia. The idea is that life is wonderful, and the polyphony — three voices in perfect harmony — represents the beauty of nature.”

But he stressed that it was not symbolic; that these lives were married to nature, not to the cosmos, even if Namme’s connection to nature often seemed to border on the supernatural.

Diasamidze also tried to dispel the idea that the movie was about something strange and unknowable. Namme, she said, was who she was because she was the only child who decided to remain with her father. “It’s not as if she wants to do it,” she said. “She just doesn’t want to see her father left alone.” And in a sense, that is exactly how traditions are maintained, not so much through belief, but through a sense of obligation — to family, and to one’s surroundings.