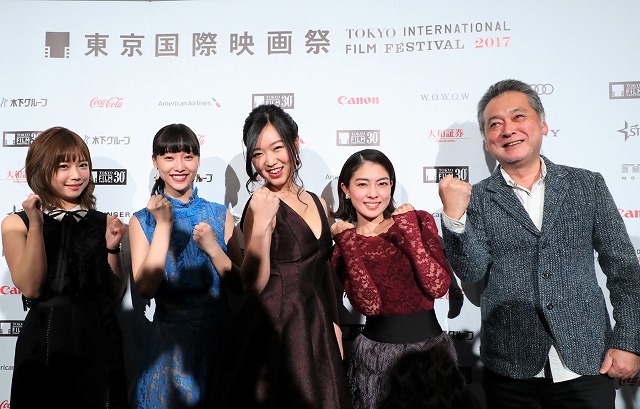 So said Mana Sakura, the writer of the novel that serves as the basis for The Lowlife, one of two Japanese films playing in TIFF’s Competition, about the lives of women involved in the Japanese softcore-pornography industry.

The three actresses joined director Takahisa Zeze and the novelist for a press conference following the world premiere screening of the film on October 31.

“My impression changed a lot,” said Moriguchi. “I always thought of them as living in some other distant world, but now I realize how close they are to us. Just walking around downtown Tokyo, I’ve started to wonder how many of the girls I see are in the industry.”

Yamada said: “My character has trouble with her mother, but in the end, realizes a mother’s love doesn’t change no matter what form it takes.”

Novelist Sakura praised the performances of the film’s actresses, saying, “I think with all the stigma toward the profession, these roles were very hard to digest. But I think all of the women did a wonderful job… I was extremely moved by their performances.”

Sakura, herself an actress in softcore films, responded: “Yes, I’ve always had the desire to reduce the stigma toward this industry and the people who work in it. In writing this book, I hoped to capture the everyday lives of these girls.”

Zeze went on to expand on the idea of the film connecting with people who have little to do with, or interest in, the industry. “I think The Lowlife is about women trying to find a place for themselves in the suffocating environment that is Japan. They happen to choose this line of work, but I think they are seeking something more universal… I wanted to take on the challenge to make this film that probably has more of a universal appeal than you would think. I hope the film reflects your own reality as well.”

The Lowlife will open in theaters across Japan on November 25.