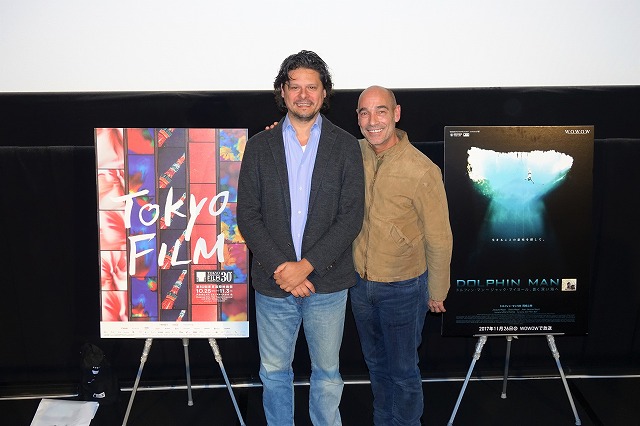 The diver, Jacques Mayol who was the theme of The Big Blue directed by Luc Besson has become a “Dolphin Man”, documentary which places Mayol’s career into perspective. The film was screened as Asian Premiere on Oct. 28th at the 30th Tokyo International Film Festival held at TOHO Cinemas Roppongi Hills. The actor, Jean-Marc Barr who played the role of Mayol in The Big Blue and was a narrator in this film, arrived in Tokyo with Director Lefteris Charitos and held the talk event.

The film follows the checkered life’s journey of Mayol, the freediver, who succeeded in reaching the depth of 100 meters for the first time in human history and put an end to his life in 2001 at the age of 74-year-old. At the same time, the film projected the world of freediving which allows you to experience the “senses that transcends human” in the sea.

Barr who says, “Following his appearance in The Big Blue, he became close with Mayol.” He says, “Mayol is my super hero“ with a smile. “He inspired many people through his personal experiences and what he learned at the sea. Because the role I played in The Big Blue became more popular than my own character; I felt I had to explain about Jacques as a person to the general public so that they could understand him. I did not act Mayol in that film. I only acted who I imagined that he would be,” he said, showing his respect to Mayol.

Meanwhile, Director Lefteris Charitos said, “I was impressed when I understood that Mayol was a complicated individual just like yourselves. He loved the sea from bottom of his heart but as a human being, he had problems just like us and was suffering from it. I was deeply impressed that he had a passion for the sea and lived passionately as a man.” In addition, he says in the film that “The most important thing is to have a family and to keep a dog.” “The freediving is not just a competition and in the end, we learn that life is all about “family”.

Following the screening of the Dolphin Man, 6 minutes virtual reality video, Dolphin Man VR was screened. It stimulated the world of 100 meters beneath the sea by wearing the head mounted display device. Barr said, “I felt a little bit relieved after experiencing the VR for the first time. It is a new dimension for the film, but I understood that the film still needs frames, directors and actors as well,” he commented playfully and raised laughter from audience.