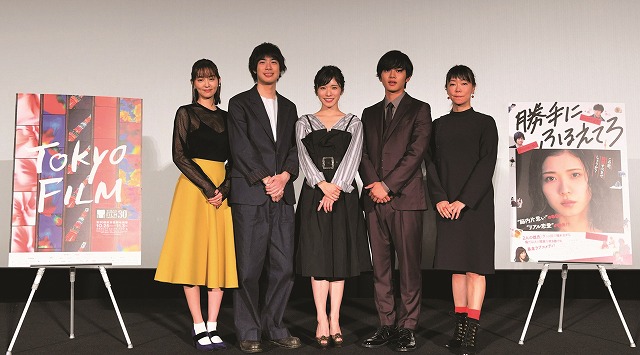 If you are a 24-year-old virgin whose only interests are endangered species and keeping alive the dream that your first love will reciprocate some day, should you stay in your own world or get out to society, where human connections always create problems?

These are the issues facing the thoroughly unique heroine of Tremble All You Want, one of two Japanese titles in TIFF’s Competition. Directed by Akiko Ooku (Tokyo Nameless Girl’s Story and Fantastic Girls), the film is a clever mélange of screwball comedy, heartbreaking melancholy, musical numbers and workplace politics.

“When I was writing a screenplay, I was just exploding with all that I’d left behind in my 20s,” noted Ooku during a press conference following the world premiere of her new film on October 30.

Based on Akutagawa Prizewinner Risa Wataya’s novel, Tremble All You Want could be categorized as a sub-genre of savvy films about female office workers, such as Working Girl and Morning Glory. Unlike those precursors from Hollywood, however, Ooku’s latest feature focuses more on the romances of a delusional protagonist than on career building in a male-dominated workplace. Beginning as a hilarious take on how to deal with disgusting male workers, the film later illustrates the delusions and isolation of the Internet generation.

The compelling charm of Tremble All You Want is the alluring performance by rising star Mayu Matsuoka, known mostly for her work on TV, here shining as the self-destructive protagonist Yoshika, who struggles to establish person-to-person connections.

Yoshika is a 24-year-old office worker who has never had a boyfriend — but not because she can’t attract someone. Yoshika wants only one man, and that is her junior high classmate Ichi, whom Yoshika has been unable to forget for 10 years. One day, her colleague Ni (Daichi Watanabe) approaches her and confesses his romantic attachment. Torn between the boyfriend in her imagination and this persistent follower in real life, Yoshika finally decides she must meet Ichi again, and engineers a fateful evening with him.

Ooku discussed her third collaboration with Matsuoka, whose Yoshika can be both charming and irritating, lovable and hateful in the space of a moment. “I decided to cast Mayu, with whom I’ve been working for the past three years, and once I persuaded the producers that she could do it, I just handed the role over to her. She did wonderfully.”

Daichi Watanabe, who played Ni, praised her for making Yoshika such an attractive character, despite her many foibles. “I became a huge fan of Yoshika,” he admitted. “In this film, you can enjoy the explosion of the charm that is Mayu Matsuoka.”

Matsuoka has been a common face on television for Japanese audiences, gaining popularity for her performance in NHK’s epic taiga drama Sanadamaru. This juicy screen role, in which she appears in every frame, is sure to broaden her appeal.

Although Yoshika’s romance is comically dramatized, Matsuoka seems to believe that her character is not necessarily a special case: “I played an ordinary girl in this ordinary story. This is a universal story, and that is why I think this film was invited to such a great film festival as the Tokyo International Film Festival. I am really hoping that this film will reach the girls all over the world, and that all the Yoshikas in the world will enjoy it.”

On a final note, Ooku shared how it feels to have her first world premiere screening at an international film festival: “In the beginning, I just made the film with the hopes that it would reach out to Yoshikas. So it’s really an honor to be introducing this film to the world.”

Tremble All You Want will have its domestic release on December 23.