“It’s the closest I’ll ever come to [making] a superhero film,” said acclaimed director Steven Soderbergh, talking about the Ocean’s trilogy following the October 31 screening of the perennial favorite, Ocean’s Eleven, which launched the series in 2001. “They’re fantasy films. They provide an opportunity to play visually, which not a lot of movies allow you to do.” 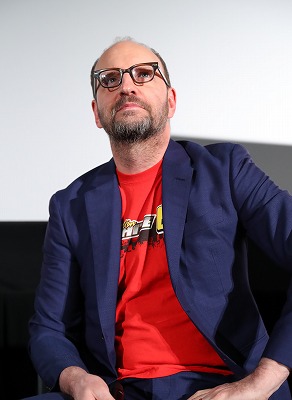 The beloved auteur was making his first appearance at TIFF, as the inaugural choice of a new special program supported by American Airlines, that will highlight exceptional filmmakers from the Americas. The kick-off edition is called The World of Steven Soderbergh, and it is showcasing three early films that helped cement the director’s reputation: Sex, Lies, and Videotape, Ocean’s Eleven and Haywire. His “comeback” film, this summer’s Logan Lucky, is also making its Japan premiere in the Special Screenings section.

One of America’s most influential filmmakers, Soderbergh earned instant international attention with his directorial debut, the 1989 Cannes Palme d’Or winner Sex, Lies, and Videotape. He won an Oscar for Best Director for Traffic in 2000, and has found both enormous box office and critical success. Nevertheless, he took a much-ballyhooed “retirement” from feature filmmaking in 2013 and worked primarily on TV series for the next few years. But fortunately for us, the director continued to keep a hand in, and returned with Logan Lucky earlier this year.

Commenting that he’d last been in Japan six years ago, Soderbergh said, “I was here to see Ocean’s Eleven. But it was a very different type of Ocean’s Eleven.” As the MC looked at him with surprise, he explained, “I was seeing a production by the prolific all-female theater troupe Takarazuka Revue [which adapted it as a musical for its Star Troupe in 2011]. It was incredible. One of the most amazing theater experiences I’ve ever had. It was huge, just massive.”

Soderbergh’s own version of the film was already a remake itself, but few films before it (and frankly, after it) felt quite as fresh and seductive. Who can ever forget “Are you in?” — the shorthand phrase that unites a group of 10 thieves under mastermind Danny Ocean (George Clooney). If the film didn’t exactly make Clooney and his famous costars even more famous, it certainly created a still-held perception that this group of stars had more fun making and promoting the film than any actor has a right to.

All three films concern impossibly complicated — and hilarious — heists, but the first is the only one that features a simultaneous hat-trick in Las Vegas: the gang manages to pull off robberies at the Bellagio, Mirage and MGM Grand casinos in a single night. But Danny’s ultimate goal is to win back his ex-wife, Tess (Roberts, Oscar-winning star of Soderbergh’s Erin Brockovich), by proving that her casino-owner boyfriend values his bank vault more that he does her. When she spots Danny on the casino floor and warns him, “Not matter what [you’re up to], you won’t win me back,” there isn’t a film fan alive who thinks Danny and Tess won’t wind up together. But the plot machinations to reach their ultimate reunion are sheer genius.

Asked to compare his version with the original, Soderbergh said, “It was a fascinating piece of visual culture from a certain time. It felt very much like a movie that was more notorious than it was great, and there was room for improvement on a pure plot level. So I wasn’t afraid of being attacked for making it, but I was terrified of making a film on this level, since I’d never done that before.”

Soderbergh is one of the very few directors who also frequently shoots and always edits his own films. “To me, it feels like [they’re] part of an organic process,” he explained, “a return to my original impulse to make films. Editing is probably my favorite process, so at night, the opportunity to edit that day’s footage feels like a reward. With today’s technology, I get the footage within an hour of wrapping the production for the day, and I can start.”

How did it feel to win his Best Directing Oscar for Traffic on the same night he lost in the same category for Erin Brokovich, he was asked. Said Soderbergh, “Awards are the entertainment industry version of Employee of the Month, and I think it’s dangerous to ascribe too much to it. That night, I was certain I wasn’t going to win, because everyone told me the two films would cancel one another out. I was totally drunk, had no speech prepared, and didn’t have to campaign because I was shooting Ocean’s Eleven during the campaign period. So it was a perfect experience… although I have no desire to go through it again.”

Asked to talk a bit about Mosaic, his new HBO mini-series (debuting in the US on November 8), which will allow viewers to participate through an interactive app, Soderbergh said: “I was intrigued by the idea of branching narratives, although I’m not really a gamer, and the engagement between gaming is different from watching a film. But this opportunity and the kind of technology we’re developing satisfied my desire to remain in control of the storytelling, and to have the choice moments [when viewers make story choices] to feel organic, rather than disruptive. It feels like a continual experience, rather than one that starts and stops. I think it’s the cave painting of this new technology. It has enormous potential, and I’m anxious to see other filmmakers take it and run with it.”

Obviously an intensely grounded, thoughtful man, Soderbergh’s approach to success is clearly one of his secret weapons. “I was lucky to be raised in a household in which success was judged by your character and your passion,” he recalled. “I never considered external approbation, whether critical or financial, as a goal. Both my parents and early mentors valued the process and the work more than the result. I was very fortunate that my mind was focused on the quality of work and the quality of my relationships with the people I worked with. And when it was finished, [I knew] everything afterward was beyond my control, of interest only in an abstract way.”

And before heading off, he emphasized, “I have the best job in the world. It really is the ultimate virtual reality game. You’re dealing with a lot of people, money, time, the weather, your own strengths and weaknesses — you’re constantly being challenged. The project knows if you’re not bringing your absolute best, and it will bring you down. I love it.”