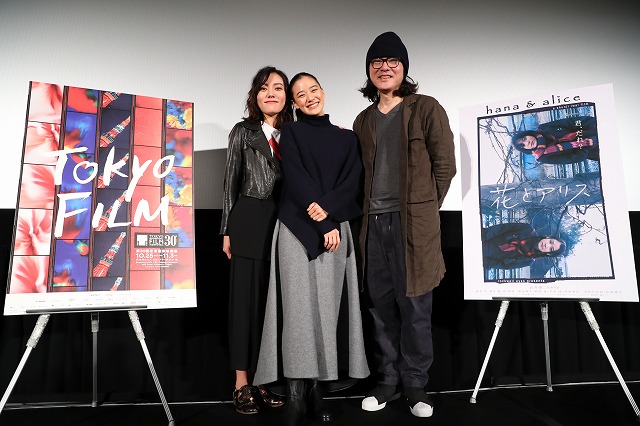 Shunji Iwai’s 2004 film Hana and Alice marked a significant turning point in the career of Yu Aoi, one of TIFF’s Japan Now Muses of Japanese Cinema. She had made her debut in 2001 in Iwai’s All about Lily Chou-Chou, playing a junior high girl who starts turning tricks and later commits suicide, a role that still haunts many film viewers. Iwai reteamed with Aoi again for Hana and Alice three years later, and it is her role as Alice that established her star persona, becoming every guy’s dream of a girlfriend and every girl’s hope for a best buddy.

Hana and Alice concerns a high-school love triangle, after Hana (Anne Suzuki) develops a crush on senior Masashi, lying on a street with partial memory loss. Presenting herself as his girlfriend, Hana creates a sticky web of deceit, and although Alice (Aoi) agrees to back her up at first, they soon realize that Masashi is far more interested in Alice than in Hana.

What distinguishes this film from other romantic comedies is Iwai’s free-style camerawork and the compelling performances by Aoi and Suzuki, which capture the vivid emotions of teenagers.

“It was only possible to make such a film at that moment, when the teen actresses were on the cusp of womanhood,” noted Kohei Ando, programing advisor of the Japan Now section, during the Q&A session following a screening of the film on October 30.

“They’ve grown up to be muses,” said Iwai, “Both actresses were so innocent and full of joy. On the set, they were having quite a spree of fun.”

Recalling the scene in which Hana and Alice start mock-snowball-fighting with cherry blossoms, Aoi noted, “Anne and I were just goofing around during a break, but the director saw us and started rolling, and the footage was actually used in the film.”

As the audience perceived from the friendly interactions between the three guests, the reunion of the Hana and Alice team was almost like a class reunion for Hana and Alice. Iwai shared a surprising incident during shooting: “When we were shooting at a beach, we found a body. At first, we thought it was a human body, and we actually called the police. It turned out that it was the body of a dolphin run aground. Local people had buried it, but these two actresses dug it up.” Aoi and Suzuki instantly defended their actions, laughing, “You told us to!”

An obvious question from a die-hard fan is what Hana and Alice would be doing in this stage of their lives, if they were not fictional characters. “It would be more depressing,” noted Suzuki. Aoi agreed, saying, “It would be about which insurance to take out or what to do after retirement.” (This, despite the characters being barely over 30.)

“I sometimes imagine what Hana and Alice would be doing right now,” admitted the filmmaker. Aoi joked, “She [Alice] must have gotten married with some random guy and been divorced already.” Agreed Suzuki, “I cannot imagine them building a happy family.”

“Alice comes across as the kind of person who lives by destroying the conventions of what it is to be happy,” noted Aoi. “It would be interesting if Hana got some social skills.”

The audience clearly supported the suggestion that Iwai follow Hana and Alice into their 30s, in the way that Richard Linklater has kept audiences up to date on the complicated lives of Jesse and Celine in his Before Sunrise/Sunset trilogy. On a concluding note, Aoi commented, “I feel like I’ve dug up a time capsule. I hope I can see you again in another ten years.” And her many fans nodded happily.