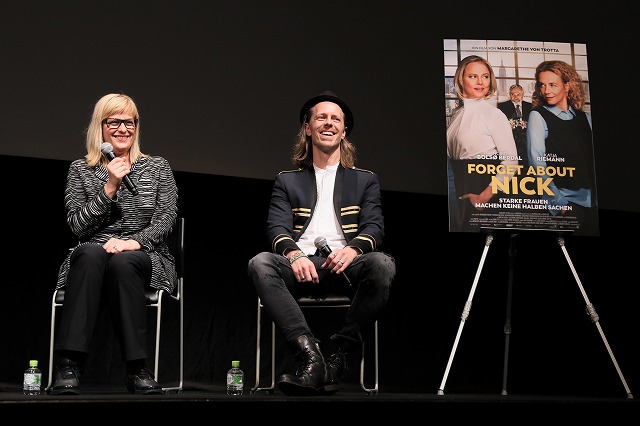 Producer Bettina Brokemper – who has not one, but two, films playing in TIFF’s Competition section – and actor Fredrick Wagner fielded questions from the press following the world premiere of director Margarethe von Trotta’s urban comedy, Forget About Nick on October 30.

Jade is attempting to pivot from a long career as a fashion model into a designer when husband Nick unceremoniously dumps her for a younger paramour. While Nick moves out to be with his new love, his ex-wife, Maria, suddenly takes his place in their old apartment. Seeking to exact a measure of revenge on the woman who originally stole her husband away from her, the intelligent Maria begins to rearrange the apartment to her own liking, removing Jade’s garish paintings and eating off of her prized ceramic plate artwork. A bewildered Jade attempts to sell the apartment to get out of the forced arrangement, when Maria and Nick’s daughter and grandson visit from Berlin for the summer, complicating the flat’s domestic dynamics even further as the two continue to one up one another in a battle of witty and resourceful cat and mouse.

Forget About Nick is a departure for Von Trotta, who achieved international recognition through her politically conscious films of the New German Cinema, and most recently received critical acclaim for her biopic of the philosopher and political theorist Hannah Arendt.

“We had to fight a long time to make Hannah Arendt, over 10 years, so Margarethe, [writer] Pamela Katz and I agreed to make something light next time,” Brokemper told the audience. “Margarethe is probably Germany’s most prolific female filmmaker, and is a very brave woman, so she said she wanted to do a comedy because she’d never done one. We all agreed to have some fun. Of course, it still became a Von Trotta film, but her themes are wrapped in nice packages here so you can have some fun while you get the message. It was not as long a process as Hannah Arendt.”

Wagner plays Whit, who serves as Jade’s tossed-around assistant and confidante, and the actor drew on his own experience to develop the role. “I had this experience with a close female friend who kept asking me for advice,” he explained. “I give her advice, she comes back the next week with new problems, I try to give her new advice. After a couple weeks, I realized she wasn’t listening to me. After a month, I told her I don’t want to hear any more. I realized what that meant though after talking about it with Bettina, who told me, ‘We don’t want answers, we just want you to listen.’”

Wagner said the experience of working with Von Trotta was like working with his grandmother, “who is truly a wonderful person. She is so warm and trusting,” he said, “so it was very motivating to work with someone who trusted us so much.”

Brokemper briefly spoke about the link between Forget About Nick and Grain, her other film screening in the Competition section. “We live in a capitalist society and need money sometimes to get things done,” she said. “I think we have reached the breaking point with capitalism, taking it as far as it could go, so we have to think of what we can do now. But I’m not a politician; I’m just a filmmaker.”

She also spoke frankly about women working in the German film industry today. “I started 18 years ago, and there were not many female producers, but there are more and more the last 10 years,” she said. Although she cautioned, “there is a tragic statistic that only 4% of all films with a budget over 3 million Euros are directed by women. We are fighting for the ability to direct more and bigger films now.”

Forget About Nick concludes with the potential for more hijinks, though Brokemper said no sequel is currently in the works. “We want to make another film together, but Margarethe has to finish her Ingmar Bergman documentary first,” she said, while also surprising the audience with this: “I think the next film she wants to do is a crime film.”

Wagner, on the other hand, remarked that “a sequel is a good idea.”