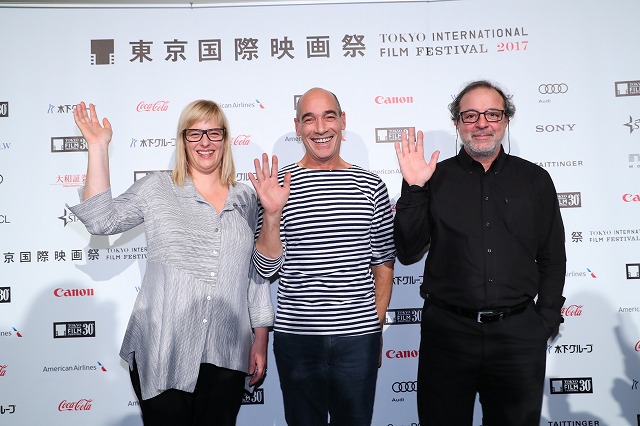 In a dystopic future, the world is beset by food shortages due to poisoned soil. Most of the population is housed within a city barricaded by an energy field that sets fire to anyone who tries to breach it. Professor Erol Erin (Barr), who is employed by a large agricultural biotech corporation, sets out on a quest toward the desert beyond the wall, to find the scientist who discovered the M particle, a molecule that lies behind the secret to producing a sustainable grain.

Grain offers a cautionary tale for a world that is increasingly reliant on genetically modified food. “If you destroy one part of an ant’s nest, you destroy the entire habitat,” Kaplanoğlu said, succinctly summing up its primary theme.

The script for Grain, which he spent over 5 years writing, also comments on a number of social developments that have dominated news headlines over the last several years, including the European refugee crisis, climate change, and even allusions to the platform touted by US president Donald Trump. “The script started from the premise of many of these things happening in the near future,” Kaplanoğlu explained, “but very rapidly this world is changing. What I thought would be in the future became something more immediate.”

Professor Erol is both confused and disturbed by the world he finds beyond the wall, and Barr said Erol’s journey was demanding for him as an actor, as well. “What Semih asked us to do with this film was a spiritual and physical boot camp,” Barr said.

Barr also commented on the “liberating” experience of working in English with an international cast: “I had the great opportunity to work with actors from Bosnia, from Romania, from Russia and Japan,” he said. “Cinema is an international discourse, and it seems to be evolving a lot in English to really communicate in a very privileged way. For me, this is exciting. The film was difficult to shoot, but it was a wonderful experience.”

Grain’s stark landscapes were shot on location in Anatolia and Germany, while some of its urban ruins were set in Detroit. Shooting on film and in black and white allowed Kaplanoğlu to connect these disparate locations. “ I had a lot of 35mm negative stock on hand, and it’s the format I am most comfortable with,” he said. “We shot in many different locations, and shooting in monochromatic film allowed me to maintain a uniform look despite the different shooting conditions. I also thought there would be a new perspective offered by shooting in black and white.”

Both Barr and Brokemper passionately applauded the film’s socially conscious messages. “We are wasting time to change the way we are doing things,” said Brokemper. “Semih had a visionary film that looked at the future, and I’m glad to have gone along for the ride.”

“A lot of cinema today is here for entertainment,” said Barr, “and that’s great. But like Semih’s films, there’s a real change of consciousness worldwide. I was so happy to be part of a film like this that approaches this problem spiritually but also intellectually.”

Barr also urged hope: “Humanity must change the way it has been living for the last three, four, five hundred years,” he said. “But cinema culturally can help pass that message on.”