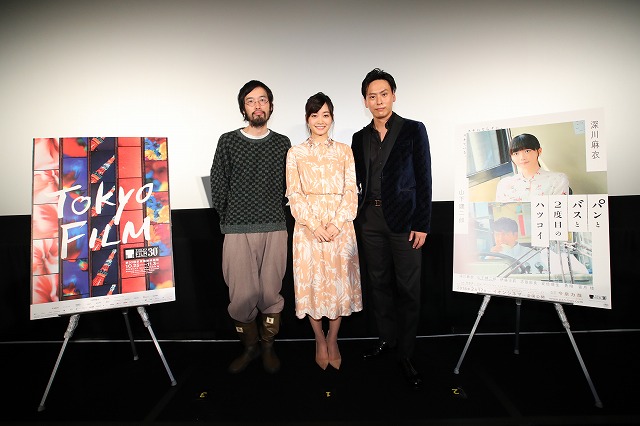 It was hardly a surprise that the world premiere of Rikiya Imaizumi’s newest movie, our blue moment, would be sold out, given that the film’s two stars would be joining the director on stage for a chat before the public screening. The director himself also has a devoted following in Japan, with three previous films screening in TIFF’s Japanese Cinema Splash section (Sad Tea, Their Distance and Same Old, Same Old) and a variety of TV and music videos to his credit.

The lead actress of our blue moment, Mai Fukagawa, is a former member of the idol collective Nogizaka 46, and her co-star is Kenjiro Yamashita, a current member of the R&B song-and-dance group 3rd generation J Soul Brothers. As idols their fame is built into everything they do, and the large crowd of fans were clearly excited to see them together in a romantic comedy.

Prior to the film’s debut in TIFF’s Special Screenings section on October 29, the MC complimented the pair on their fashion sense. Imaizumi, dressed relatively casually in one of his trademark baggy cardigans and rain boots—which, considering the storm wailing outside, was appropriate—seemed slightly out of place standing next to them, though with his scruffy beard and friendly smile he would probably look comfortable anywhere.

The three chatted briefly about the theme of the movie, a love story in which the two principals actually try very hard not to fall in love with each other. Imaizumi mentioned that he wanted to make a movie that looked at marriage in an unconventional way.

Fukagawa’s character, bakery employee Fumi, seems to have decided at an early age that marriage is not the be-all and end-all of life. When her boyfriend of two years proposes marriage and she turns him down, she wonders, How could anyone commit to loving someone for the rest of their lives when the future is so uncertain? Yamashita’s character, bus driver Tamotsu, reconnects with Fumi, who had a crush on him in junior high school, following his divorce. But he is still convinced that marriage means total dedication to one person, and he says he still loves his ex-wife and hopes that someday they can reconcile, despite the fact that she is already with another man and is heading toward a second marriage.

What’s perhaps most unusual about our blue moment is its almost total lack of interpersonal conflict. Fumi’s and Tamotsu’s romantic longings contain not a smidgen of resentment, even though both recognize that “one-sided love” is probably more common in life than the requited kind. Imaizumi even introduces another figure from Fumi’s junior high days, one who had a crush on Fumi but who happens to be a woman. She’s now married with a child, though she admits that her happiness has more to do with security than with emotional fulfillment. Rounding out the small cast of characters is Fumi’s sister, Niko (Sara Shida), who is boarding with Fumi while she studies to be an artist, a career path Fumi had earlier hoped for, but abandoned after she graduated from university.

Fukagawa didn’t seem completely comfortable talking about her portrayal of Fumi. “It was my first movie,” she said, cautiously. “I was very tense,” she added, but not because of Imaizumi, whom she described as being a “very warm” director.

Yamashita was obviously more relaxed on set, even though his role, too, was a “challenge.” “It was very easy to get along with the director and the cast,” he told the audience. The MC, noting that both leads came from idol backgrounds, asked if they had a chance to dance together — an odd question since neither of their characters betrayed any penchant for musical expression — and they said they didn’t. Imaizumi implied that Yamashita was actually “too cool” for that kind of thing, to which Yamashita replied, “I’m not really that cool,” and the audience laughed.