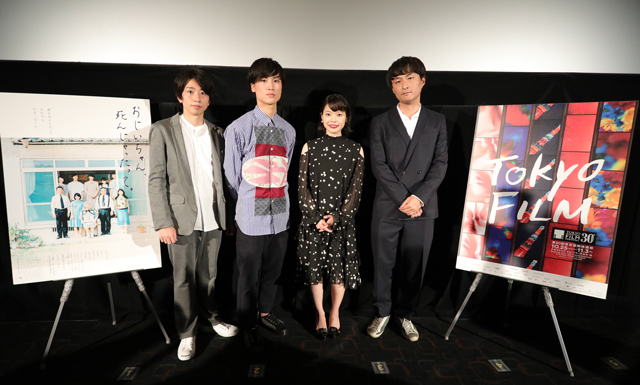 The death of a patriarch leads to the reunion of a seriously dysfunctional family in Goodbye, Grandpa!, which, despite harrowing weather outside, premiered to a near sold-out crowd in TIFF’s Japanese Cinema Splash section on October 29.

“I was worried because of the rain, so I’m happy to see so many people here today,” said director Yukihiro Morigaki, during stage greetings before and a Q&A following the film.

As the film progresses from that fateful phone call, it becomes clear a death is just about the only thing that could bring the members of this fractured family together. The process of holding a wake and a funeral, as well as finding a nursing home for the family’s widowed matriarch, reopens old wounds in brutally awkward — and often hilarious — fashion.

“This is the first time I’ve seen the film with an audience,” said director Morigaki, “I heard a lot of laughs, so I feel really relieved.”

Goodbye, Grandpa! is the first feature film from Morigaki, known for his work directing award-winning commercials.

Commercials are over in a matter of seconds, but “with movies, we lock you in a room and take up two hours of your time, so there’s a lot of pressure,” admitted the director, who went on to say that he knew he wanted to make this story his debut feature since first reading the original work by novelist and screenwriter Sahoko Yamasaki four years ago.

The film also marks the cinematic debut of Yukino Kishii, whose background is in stage acting. The actress actually arrived at the Q&A right after a performance. “I’m curious about how people react to it,” she said. “I’ll have to secretly watch it with an audience once it comes out.”

Kishii also stressed the universal theme of the film, noting that family struggles are part of everyone’s lives.

Aside from the three young actors on stage, the cast of Goodbye, Grandpa! includes veterans of the industry like Ryo Iwamatsu, Jun Miho and Ken Mitsuishi.

Goodbye, Grandpa! took the cast and crew to Hitoyoshi, a town in Japan’s southern Kumamoto Prefecture, where they spent several weeks shooting the film. Ikemoto explained to the audience that the time away from Tokyo allowed him to form a special bond with director Morigaki.

“I always waited for him to come back after shooting so we could go to the hot spring,” said the young actor; to which Morigaki responded, laughing, “I actually just wanted to sleep, but Ikemoto always wanted to talk about movies! I didn’t want him to lose his motivation for the film, so I couldn’t say no!”

Matsuzawa, whose character does not appear in many of the family-only scenes, revealed he had some free time to explore the area by bicycle, eventually stumbling across a sashimi bar whose owner was initially weary about the intrusion of a film crew into his town. “But as the night went on,” the actor said, “we became buddies, and he even gave me free drinks and a ride home.”

Morigaki ended the talk with a request to the audience about the film, which opens in Japan in November: “We don’t have much money for promotion, so I’d been dropping postcards about the film into mailboxes on my jogging route until I was told I might get in trouble, so I had to stop. So please, share the word if you liked Goodbye, Grandpa!”