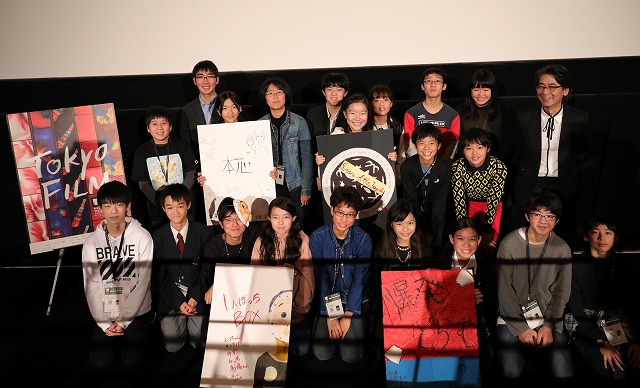 They say that young people in Japan are no longer interested in film. Aiming to break this trend, TIFF launched the new Youth section in 2016, and began organizing screenings of films that had important messages for children, as well as their parents. Following the success of that section, the festival decided to do something even more in this anniversary year: organizing a film workshop.

As documented in the 30-minute documentary When a Film Is Born by Takashi Nishihara, 23 junior high students gathered in Tokyo’s trendy Daikanyama district during summer vacation to experience the adventure of filmmaking over 9 days. Divided into 4 groups, these soon-to-be filmmakers learned to write a script, shoot a scene and edit footage from the project’s lead mentor Nobuhiro Suwa, the renowned filmmaker of 2/Duo, M/Other and The Lion Sleeps Tonight.

On October 29, the students’ four short films had their world premiere screenings at TIFF in front of a large (and enthusiastic) audience. “I was so moved,” noted the making-of director, Nishihara, watching the films in the front row. “They were full of freedom and I felt the power of democracy. Since no single director was [given credit for each film], they obviously respected each other and had constructive arguments.”

The first film screened was Lonely BOX by Team YELLOW, the story of a schoolgirl who happens to see a masked man. The film comes across as a J-horror work, reminiscent of Kiyoshi Kurosawa’s masterpieces, about how nightmares can invade our reality, and how we must pay for our own actions. According to Yuzu Hattori, the leading actress, the team came up with the idea when “one of members saw a scribble, which said ‘lonely box.’” The entire team built the narrative together, inspired just by this one found-concept on a street.

Team RED directed Diary of the Tragedies, the 9-minute story of a man with memory loss. About half of the film is a single long-take in which the protagonist notices the diary of Astrid, who was assassinated under the dictatorship. Quietly scary and politically minded, the film dramatizes a man’s struggle in a suffocating country, as if a social-realist filmmaker is depicting the PTSD of Japan’s Jason Bourne. The inspiration for the film came from a self-introduction during the workshop, in which Haruka Ito, who plays Astrid, presented the basis of this story. “I was reading George Orwell’s 1984, and got inspiration. Currently I don’t reside in Japan, and where I live now is not politically stable. But maybe I should not say this in public,” laughed Ito.

Hidden Feelings is Team BLUE’s contribution to the program, a psychological drama about a protagonist who is bullied due to a heartless rumor. Later in the film, characters got lost in a metaphysical world where Loki the 25th is ruling. This is a cinematic adaptation of Theater of the Absurd, which welcomes a grandiose denouement in the end. Summarizing the filmmaking experience, Haruta Takemaru, who played a bully, said, “It really changed my view of film.”

The Silence of the Exploding Drums was directed by Team GREEN, and is about a group of young actors and actresses who feel extreme jealousy toward a genius child actor. Their career-crazy envy takes the form of explosive drum numbers in which the emotional state of star wannabes reaches its peak. Team GREEN’s imagination contributed to fun camerawork galore, such as a mirror shot and a dolly shot. According to Nene Mukai, the leading actress, “There was a huge mirror on location. The best way to shoot characters without showing the camera was shooting through the mirror.”

The four films presented at TIFF are definitely not kid’s stuff, but wonderful pieces of art, born out of impressive sensitivity and creative minds. In addition, these teen filmmakers are not afraid to state their opinions on screen, meaning they are much more political than the majority of Japanese films today. They remind viewers of the fundamental fact that film should be an expression of pure imagination and freedom of speech, away from all the film industry politics. As Suwa mentioned at the end of the screening, “No one was told to do anything, and that’s a wonderful thing.”

Manami Uehara, the leading actress of Hidden Feelings, made a memorable speech in English after her film: “Thank you for watching. This movie is not perfect but this movie we made [working] hard is my treasure in my life.” It was a pleasure for both the filmmakers and spectators, and that is how cinema should be.