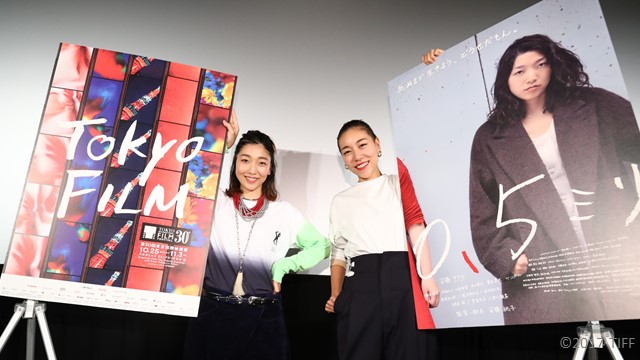 Director Momoko Ando’s moving 196-minute epic was the talk of Japanese cinema when it premiered in 2014. Sawa (played by the director’s sister, Sakura Ando) is a caretaker for the elderly when she is let go from her agency after a tragic series of events at the home of a client. To survive, she targets lonely old men and entraps them, demanding they take her into their homes. Sawa ends up befriending and helping a range of elderly Japanese – a former mechanic, a retired teacher, an unemployed alcoholic – in a series of funny and moving vignettes that take place around the picaresque suburbs of working class Shikoku. Her journey, though, cumulatively ends up transforming her – and the audience, too, in the process.

The Ando sisters were on hand to look back on the film and field questions following a screening of the film to a packed house on October 29 as part of the Japan Now Muses of Japanese Cinema section, where Sakura Ando is being honored. “I think there are more people here now than when the film premiered at TIFF the first time,” Sakura quipped.

0.5mm is adapted from a novel written by Momoko, who based the story around her own family’s experience taking care of their infirm grandmother. “I didn’t want to make a film about nursing care,” explained Momoko. “What was more important to me was to depict how a family faces death, which comes to us all.”

The conversation became an intimate and spirited one between sisters as they discussed their own memories of their grandmother. “As a family, we took care of her until the end, and I wrote the novel looking back on that experience after I had matured a bit,” recalled Momoko. “But I was actually studying abroad at the time and felt quite objective about the situation. Sakura, on the other hand, was right in the middle of that maelstrom.”

“You were gone for 9 years,” Sakura reminded Momoko, “and grandmother took care of me. I was with her the entire time after she got sick, but my sister had to be away and couldn’t see her getting weaker and weaker. I started to wonder who was having a more difficult experience – me, who was up close, or my sister, who was forced to watch from a distance. It must have been difficult for her. We talked about it often, and we even had some arguments about it.”

If the film seems tailor made for Sakura, this was entirely by design. Sawa’s character undergoes a dramatic range of emotions and character growth that display the full breadth of Ando’s acting chops. “I did have her mind the entire time as I wrote the story,” said Momoko. “I got greedy, and that’s why the film is 3 hours. I’ve watched her since she was born, so I wanted to capture everything about her in the film.”

Momoko especially wanted to emphasize Sawa’s maternal quality, which ends up charming the various elderly men she encounters. “There’s a scene, which you can see at the end of the film’s trailer, when Shigeru wakes up, and sees Sawa in the kitchen, and says ‘Good morning,’” Momoko explained. “That expression, that moment of strong maternal love reflecting the soul of the Japanese people, is what I feel you can see in films of the Golden Age and you don’t see in Japanese films today. Just thinking of this shot makes me cry.”

Both sisters commented on the journey they had made since beginning their careers. Sakura reflected fondly on her experience working with Hikari Mitsushima, also one of the TIFF Muses of Japanese Cinema, in her acting debut in Sion Sono’s Love Exposure, and said she hopes to continue being introduced to such exciting characters like that found in 0.5mm.

Momoko confessed that she contemplated quitting filmmaking and becoming a full-time mother upon giving birth to her first child. She was able to refocus her energies, however, and feels recharged. “We have to be the vanguard for the children of the future,” she said. “I look at my child’s face and think he’ll have a fighting spirit like mine. If I die, I have to know that I’ve shown him the way forward without me. Isn’t this why film is amazing? Each film is full of the spirit of its creators. The world might end, but this is our contribution. This is how we fight, by baring our souls.”