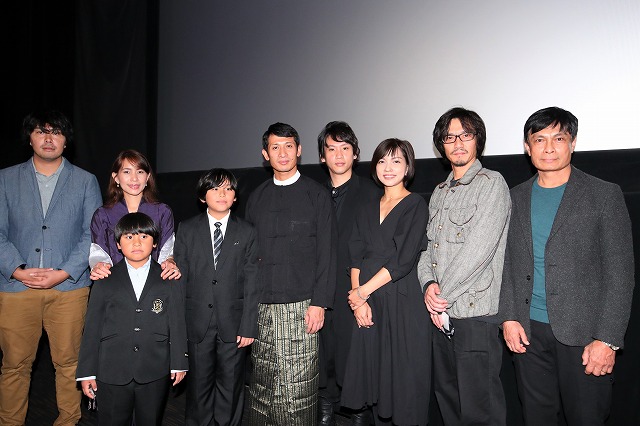 Prior to the world premiere screening of the Japan-Myanmar coproduction Passage of Life on October 29, director Akio Fujimoto and 9 members of his cast and crew appeared to thank the audience for braving the storm outside (an approaching typhoon) to attend. The two child stars of the film, which is screening in TIFF’s Asian Future section, struggled to remain composed in front of the large audience, while their adult costars shared behind-the-scenes details that would soon prove to deepen viewers’ reactions.

Passage of Life is based on the true story of a Burmese family living in Tokyo after immigrating to Japan with no visa, like many others did in the wake of the 8888 Uprising in Myanmar. Told with unusual poignancy and empathy, it paints in broad strokes the final weeks before the family is separated, perhaps permanently.

Arriving in Japan after their two sons, Kuang (Kaung Myat Thu) and Htet (Htet Myat Naing) are born, the parents find illegal work and yet, appear to have created a happy life with their two young boys, both of whom have been raised Japanese and have the attitudes to go with it (“Idiot!” the elder, Kuang, yells at his mother when he doesn’t want to do as she asks).

After several years, the father (Issace) files papers saying they left their country because “it was no longer safe,” and requesting political refugee status. When the request is turned down, as happens all too frequently in Japan (which accepts only a handful of refugees each year), and Immigration shows up at the door warning Issace to stop working, the mother (Khin Myat Thu) says, “We can’t be safe, not even in our own home. We’re trembling in fear. What will we do if we’re turned down again?” Soon, with options dwindling, their only choice is to go back to Myanmar… but Issace stays behind, to continue working so he can send them money. And with that, a loving family is broken.

During the Q&A session, the first-time writer-director-editor explained the genesis of the project: “It was just by chance. It occurred when I was in a Burmese restaurant in Takadanobaba, where there are a lot of such restaurants, and I became friendly with a woman who worked in one of them. I started talking to a lot of Burmese people here and heard about one family who had complications with the children and had to go back home.”

Despite appearances to the contrary — the familial affection between the four main characters is palpable on screen —Fujimoto explained that the mother and sons are actually related in real life, while Issace is simply a man living in Yangon. He recalled, “The boys were 3 and 6 when the film was made, and they didn’t know Issace at all when filming began, so it was a real challenge to get them to call this stranger ‘Papa.”

Japan-based Khin Myat Thu said, “It was the first time I’d acted and I was already 39. Despite a lot of trepidation, though, Kuang was really interested in acting, so I was really happy to make this film with my sons.” Admitted Issace, “I am also a non-actor, and it was difficult to figure out how to communicate and act with these children of mine.” The boys smiled happily at him. “But their encouragement made it possible for me.”

Pressed to say a few words about his experience, Kuang said, “It was the first time I’ve acted, so I was a bit nervous, but it was a lot of fun. I especially liked going to Myanmar.”

Responding to a question about whether the director had any further message for the Japanese government — although the film speaks volumes about the inadequacies of Japan’s immigration policies — Fujimoto responded, “I think it’s not only politicians, but citizens who have to contemplate and resolve this problem.”

Passage of Life is a Japan-Myanmar coproduction shot in 2014 by a production team of 30, both Japanese and Burmese, and over 2 years alone were spent on the editing. Said Fujimoto, who favored long cuts while shooting in order to capture the authenticity he knew was required, “We had tens of hours of footage that we had to edit down to the final cut, but I don’t think we really left anything out that I wanted to express.”

The film is in Japanese and Burmese, with the mother and father characters speaking in both languages. Earlier in the evening, another cast member, Niina Kuroyama, had noted, “I was born in Myanmar and came to Japan when I was 5, so I had a similar background as the two boys in the film. As the years went by, I gradually gained a Japanese identity. When I talk with my mom, we speak in Burmese, so I can still speak the language. But I hope the boys won’t forget their mother tongue.”

TIFF’s Asian Future section is devoted to the discovery of emerging Asian filmmakers, and with this exceptionally sensitive first work, it’s safe to say that Akio Fujimoto is has arrived.