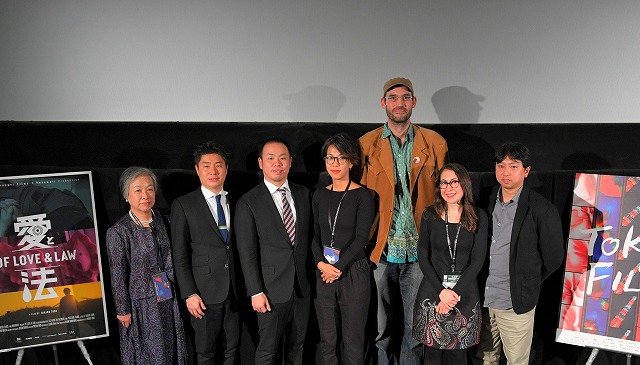 Of Love & Law documents the private and public lives of Kazuyuki Minami (Kazu) and Masafumi Yoshida (Fumi), a gay couple who are the founders of the first openly gay law firm in Osaka. However, audiences should not expect a kind of LGBTQ-friendly film that simply celebrates diversity.

Instead, this insightful documentary explores the malfunctioning of the Japanese system in regard to protecting minorities. The documentary’s London-based Japanese director, Hikaru Toda, who made Love Hotel and other documentaries about Japan’s dark side, again pulls back the superficial curtain of cool Japan and illustrates fundamental problems in Japan’s judicial system through the eyes of her protagonists.

Bowing to an enthusiastic crowd right after the world premiere screening in TIFF’s Japanese Cinema Splash on October 28, Toda described how the project came together: “I met [Kazu and Fumi] 6 years ago for the first time, when I was working on my previous film. I fell in love with Osaka and this charming couple. But I wondered, as an openly gay couple, how they could manage to live in a Japanese society that is so arduous to live in.”

Elhum Shakerifar, the film’s producer (A Syrian Love Story) and a longtime friend of the director, said she jumped straight into the project because “representations of Japan in the UK are superficial. You don’t really get a sense of depth and layered, nuanced ideas of the country. We really wanted to challenge that, and in that way, to give a sense of society that is much more diverse than what we see.”

The film delves into a diversity of topics, revealing Japan’s conservatism as the camera records Kazu and Fumi handling their cases. The first lawsuit that we witness is called “Police vs. Vagina,” and it concerns the internationally infamous case of artist Rokudenashiko, who has been charged with breaking Japan’s obscenity laws by uploading 3D data of her vagina online. The boundary-pushing artist and the filmmaker question the vague definition of obscenity itself, and expose systematic discrimination in Japan, which is hostile toward those who do not follow social norms.

The Nanmori Law Office, Kazu and Fumi’s law firm, also deals with the cases of a teacher who was penalized for refusing to sing the national anthem during a school ceremony, and of unregistered individuals who do not hold citizenship due to family circumstances. In a country where 98.5 per cent of residents are thought to be Japanese, the majority ignores the rights of the minority.

That being said, this is definitely a portrait of Kazu and Fumi’s “married” life in Osaka, where legalization of same-sex marriage is not a serious issue yet. Watching their lives on screen, Kazu remarked that “It’s been a year since we finished filming. I was looking at myself on screen, but it was like somebody else’s life.”

According to Fumi, who experienced a more difficult adolescence and shared his ordeals onscreen, admitting he still feels inadequate, exposing own private life was a little bit scary but also worthwhile: “Thinking of the situation of young gay people, I strongly believe that there must be something that people can understand through our private lives, and I can create a change in society.”

Despite all the politics, Kazu and Fumi bring lots of humor and a sense of hopefulness to the situation. In the end, Of Love & Law is a celebration of family, community and partners who are willing to offer support, especially when the government and society cannot be relied upon. Recalling her late husband, Kazu’s mother Yae noted, “My husband fundamentally believed in equality. I remember there was quite a huge gender imbalance in our marital life, but still he had a strong sense of justice. He would have loved the film.”

No release date has been announced yet, but Of Love & Law is expected to hit theaters next year.