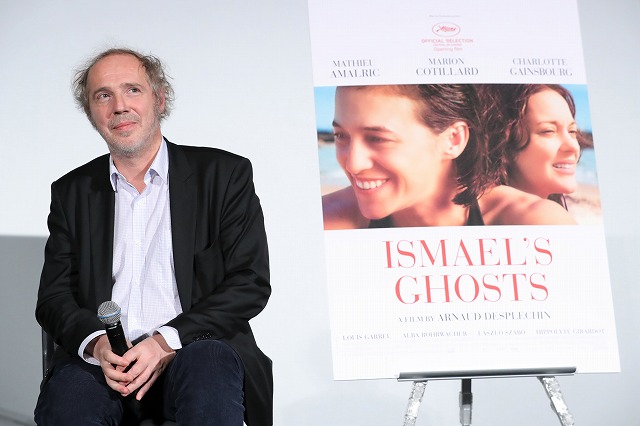 “It is difficult to explain my film, because 10 different stories create one stream of fiction,” said Arnaud Desplechin about his latest directorial effort Ismael’s Ghosts, and he was right.

The renowned French auteur’s 2017 Cannes opener had just had its Asian Premiere in TIFF’s World Focus section on October 28. Extremely complicated and unconventionally structured, Ismael’s Ghosts consists of several monologues and subplots galore, allowing diverse fragments to gradually establish a sense of loss and destruction. Instead of reproducing the type of romantic tale that the director is known for, like My Sex Life… or How I Got into an Argument, Desplechin makes a bold move to challenge the filmic medium and stretch his capabilities as a filmmaker.

At the core of the narrative is a classic triangle relationship between a filmmaker, Ismael (Mathieu Amalric), an astronomer, Sylvia (Charlotte Gainsbourg), and Ismael’s former wife Carlotta (Marion Cotillard), who returns after going missing over 20 years ago. Her sudden reappearance coincides with the beginning of Ismael’s new production, based on the life of his younger brother Ivan (Louis Garrel), an assumed spy whose whereabouts is a mystery.

By combining polymorphous plots, Desplechin considers how the past can affect our present state, how much of its representations can be constructed through reality. “Fiction is everywhere around us,” he told the TIFF audience during the Q&A session. “The purpose of fiction is to repair our life, to make it better. Ismael almost hates his diplomat brother Ivan. Thus, he dreams about him and gives him this wonderful adventure story, as if he’s trying to repair his hostile emotions against Ivan.”

Although the film consists of a number of subplots, they were not necessarily written for Ismael’s Ghosts. “I first had separate stories and decided to just place independent stories separately,” said Desplechin. “Then I came up with the idea to convey Ivan’s story through the filmmaker’s eyes. I’ve never had a filmmaker protagonist before, so I allowed myself to do that.”

Having said that, Desplechin’s depiction of a filmmaker is not a reflection of himself or any other director. As he explained, “I don’t think either I or Mathieu could be a filmmaker like Ismael, who allows himself to be violent, rude, whimsical and extreme. He even escapes from the set, which neither I nor Mathieu ever do. We are more careful and never take as much ‘medicine’ as Ismael does.”

Desplechin successfully attracted the attention of French goddesses Cotillard and Gainsbourg. “To me, it was a dream come true,” noted the filmmaker of his cast. “Carlotta disappears once and then reappears, almost like a myth. I feel this ability in Marion to be able to create this myth. At the same time, Carlotta is very simple. She could be like a puppy or a little girl in the dance scene. There’s no myth in that. Marion has the ability to create a myth and then make that myth disappear.”

Although Desplechin’s film is as mysterious as Cotillard’s character, production of Ismael’s Ghosts was not free from the events of real life. The filmmaker explained that during the process of screenwriting, there was a terrorist attack in Paris. “I couldn’t keep on writing the script anymore,” he recalled, “because French people realized a new vulnerability within themselves. The characters I was writing were not aware of their weaknesses.”

A gentleman in the auditorium adroitly described Ismael’s Ghosts, saying, “It was as if we could watch nice dreams, while all the characters are having nightmares.” However, Desplechin’s film warns us how representations of reality and the past, which we thought only existed in our memories, could come back and influence our lives, as well as others. As Desplechin noted, “We are now living in a new danger that was not accessible before.”