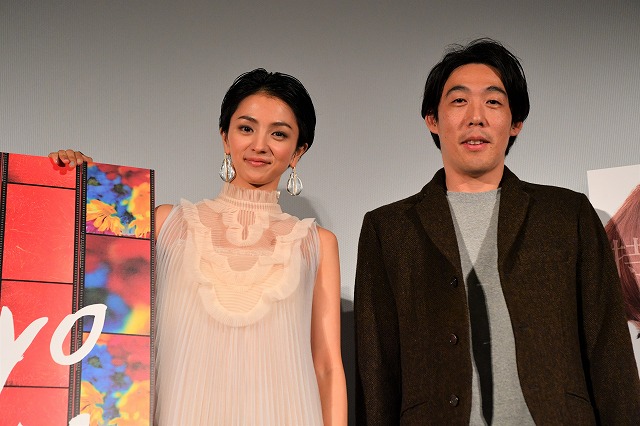 The film is about a magazine reporter named Tanaka (Satoshi Tsumabuki) who follows the unsolved murder case concerning the family of the elite white-collar worker. Through Tanaka who witnesses a real nature of persons involved; the film depicts envy, jealousy, bargaining, which are the “foolishness” that accumulates in everyone’s daily lives.

The Japan Now Section, Programming Advisor, Kohei Ando mentioned that Mitsushima who played the role of Tanaka’s sister, Mitsuko, “Expressed a brilliant sense of emptiness.” “Demands of acting felt like walking a tightrope. I was bracing for a big failure, “ Mitsushima said, as looking back at the time of shooting. “I was trying to appear in the picture like some mysterious person, but I didn’t achieve the feeling of accomplishment. I felt I could have trusted in Director Ishikawa even more,” she expressed herself.

Director Ishikawa was looking forward to finding out “how Mitsushima will be shot in the film” by the Polish director of photography, Piotr Niemyjski, who worked with him. When Ishikawa said that “he found a new expression of Mitsushima” in the edited film; she declared sympathizing to his comment, “I also felt like it was beginning of my “new self” in the film. Piotr made ‘beautiful or not beautiful’ as the evaluation standard of cinematography. Director Ishikawa’s film structuring methods were different from the other directors and there were numerous improvisation as well. There were also many scenes shot which were not in the screenplay,” she said.

Eliminating such empathies as pitiable or adorable, Mitsushima asked the cooperation from the screenplay writer, Kosuke Mukai and made a persistent effort for improving expressions and flows of the dialogues. Tsumabuki’s presence was necessary to complete the role making for Mitsuko. “He treated me like a sister in private and it felt like he really thought of himself as my brother. He tried to understand his partner in new ways and we didn’t need the time to develop love for the film. I felt very lucky,” she said with a deep trust for Tsumabuki.

When the audience popped up with a question whether there were any other co-actors that deeply touched her like Tsumabuki; Mitsushima answered, “Because I am continuously searching for my favorite virtues in everybody during the shooting; I try to avoid going to dinner as much as possible. That is because I might suddenly be surprised finding the ordinary person in them. I have recently felt the overwhelming feeling of admiration from Kenji Ozawa, although he wasn’t the co-actor. The first time I met someone that amazed me since I started acting was Sakura Ando. When I participated in some sort of workshop for LOVE EXPOSURE, I was really surprised by her overwhelming acting skills. I still treasure the memory of co-starring with her.