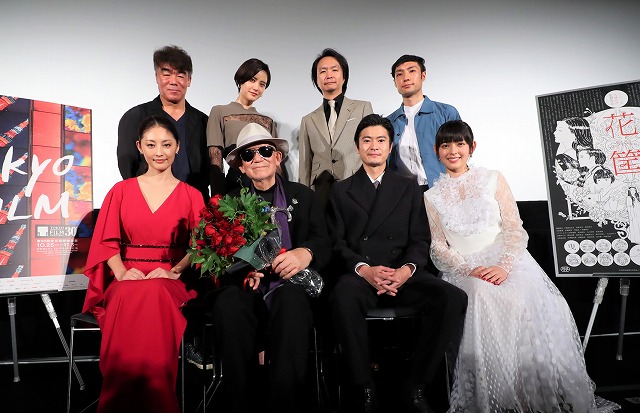 Hanagatami, the film Nobuhiko Obayashi has wanted to make for 40 years, is finally a reality.

The film played in TIFF’s Japan Now section on October 28 to a room packed with fans of the legendary filmmaker, who took to the stage following the three-hour epic with several members of the cast for a Q&A session.

Hanagatami, based on a novel by writer, poet and essayist Kazuo Dan (1912-1976) takes place in the days leading up to Japan’s attack on Pearl Harbor, and tracks the lives of a group of bourgeois youth, raised on Edgar Alan Poe, Lenin and Beethoven, who can’t understand why they have to go to war with the West.

Perhaps best known to the English-speaking world for his whacked-out 1977 horror film House, Obayashi has been making shorts, commercials and features for over four decades. He is known for a surreal style that’s on full display in Hanagatami, which is full of trippy primary colors, green-screen trick photography and a general — and quite intentional — disregard for the normal ‘rules’ of narrative film.

“I was shocked at what a ‘free’ director he is!” said popular actress Takako Tokiwa, who plays Keiko, the mother figure to the film’s high school-aged protagonists (although she is essentially the same age in real life).

That freedom extended to the casting, explained Keishi Nagatsuka, who plays Kira, a brilliant nihilist and one of the film’s three male leads.

“My character is in his teens, but I’m over 40!” said Nagatsuka, to appreciative laughter.

In another piece of unconventional casting, Obayashi cast New York-based artist Taiyo Okamoto, who has never before appeared in a film, as Ryo, a cello player who dies on the front lines in Manchuria.

“House was very popular in New York, and that’s how I got to know about and meet Mr. Obayashi,” explained Okamoto, “and from there I somehow ended up being in this film.”

Though most of the cast is made up of professional actors, including Shunsuke Kubozuka, Honoka Yahagi, Hirona Yamazaki and Takehiro Murata, all of whom joined Obayashi on stage, the director told the audience he instructed them to “act like amateurs” in order to evoke the film’s distinctive performances.

Yahagi, who plays Mina, a young woman bedridden with tuberculosis, also shared her thoughts on the film: “Including today, I’ve seen it about four times. Every time you see it, you find something else to enjoy about it, so I want people to see it many times.”

Obayashi has wanted to adapt Kazuo Dan’s Hanagatami for 40 years — so naturally, one of the first questions asked was why now? “Forty years ago, no one was ready to accept it,” Obayashi remarked about his anti-war film, “the country was experiencing rapid economic growth, and people were satisfied — lost in peace.”

Obayashi also remarked about the intended audience for the film: “I made it for young people who have never known war.”

“I realized while making the film what a nerve-wracking time period that was,” said Nagatsuka, “and I’m glad I haven’t had to live through something like that.”

Hanagatami was made with the help of the city of Karatsu in Saga, Kyushu, and the local lore and natural scenery play a large role in the film. Several members of the Karatsu team traveled to Tokyo for the screening and received a round of applause from the audience for helping bring Obayashi’s dream to life. Another round of applause went to Obayashi’s wife, Kyoko, who has produced almost all of the director’s films, including this one.

Finally, Obayashi left the international audience with a hopeful message about the power of cinema: “As long as we believe in films, we will be able to achieve peace.”