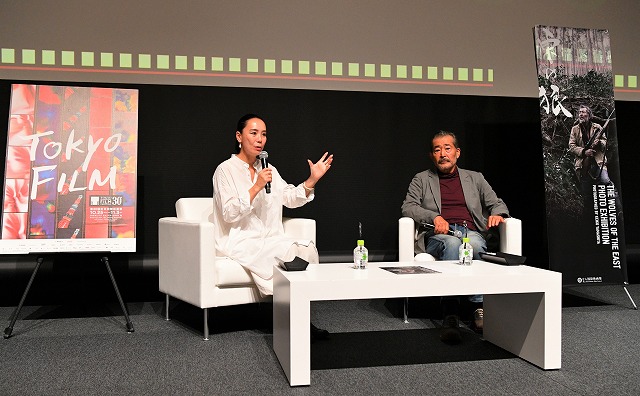 Naomi Kawase is Japan’s preeminent (perhaps only) female auteur, and among the many “firsts” and “onlys” to her credit, she is the only Japanese director to have been selected for Cannes 7 times (most recently in competition for the Palm d’Or with Radiance, which is being featured in TIFF’s Japan Now section); she is the youngest winner of the Camera d’Or in 1997, for Suzaku; and she is the only Japanese director to win the Carrosse d’Or (Golden Coach) for her contributions to the cinema.

Another first: Kawase was marking her first appearances ever at TIFF on October 28, a situation that has come about because her films always world-premiere in festivals overseas, before returning home with awards in hand.

But the crowd of emerging filmmakers, cineastes, film critics and fans who gathered for Kawase’s Master Class were not there because of a list of awards and accolades; they had assembled to hear her discuss how she makes films and why.

In a conversation that touched on selecting her subjects to selecting and working with actors, editing, choosing music, subtitling and the high cost of filmmaking, Kawase spoke frankly, and quite often humorously, about her approach. She fueled the hour-long discussion by sharing not one but three samples of her work with the audience.

In her role as founder of the Nara International Film Festival, held biennially in her hometown, Kawase is committed to mentoring a new generation of filmmakers, and often produces the work of young directors discovered at the festival. One of them is Cuban Carlos M. Quintela, whose new film, The Wolves of the East, was produced under the aegis of the NARAtive project, with Kawase serving as executive director.

The afternoon thus began with a special screening of the film, after which Kawase appeared on stage for a deeply philosophical chat with veteran star Tatsuya Fuji (In the Realm of the Senses, Bright Future, Ryuzo and the Seven Henchmen), who not only has a pivotal supporting role in her Radiance, but is also the star of The Wolves of the East.

Fuji plays Akira Nimura, a former sailor who is now a hunter in the Nara mountain village of Higashi Yoshino, famous for the wolves that disappeared 100 years ago. In their stead, the hunters have maintained the ecosystem by killing the area’s oversupply of deer. After 30 years as the head of the Hunters’ Association, Akira has become obsessed with finding an actual wolf, and takes the group’s funds to purchase tens of night-vision cameras that can be affixed to trees. He is then forcibly removed from his position as president — in a truly heartbreaking scene — and decides to head into the deep forest on what may be his final hunt.

On stage with the great actor, Kawase recalled that she sent the unfinished script to Fuji, whom she described as a “dandy,” to ask if he would be interested in acting in the project. He met with her alone at a coffee shop in Yokohama, and agreed. He then spent a month living in Nara during the shoot.

“It’s an area where the wood to build all the historical architecture of Kyoto and Nara, all the temples and shrines, comes from,” he explained. “There are still a lot of older houses there, showing us what it was like when it was still prosperous. When night falls, a lot of deer start coming out, and they actually do a lot of damage to the newborn trees. It was only 10 km away from ‘civilization,’ so I could recharge my batteries by seeing the bright lights of the city.”

Fuji was convinced that “Carlos wanted to make a Cuban film, with Nara as the setting. There are things that are difficult to interpret for those who aren’t Cuban, such as the spirit of the wolf.” When he asked the director just what the wolf was supposed to mean, “Carlos said, ‘The wolf is love,’ and that confused me even more. But I felt like maybe the wolf was similar to the director, because he had gone through such a struggle to make his film.”

Kawase added, “I’m not sure if this line was in the original script, or whether Mr. Fuji came up with it on his own, but he said, ‘The wolf is the spirit of the people of Higashi Yoshino.’ Later, the line was cut, but [we can still sense this] in the finished film.”

After a short break, Kawase screened the 15-minute film-within-a-film from Radiance, her fifth feature in the Cannes official competition and winner of the 2017 Ecumenical Jury Prize. In the short, Fuji plays a director whose beloved wife is suffering from Alzheimer’s. Although viewers of Radiance are kept in the dark about the entire story of this film-within-the-film, it is crucial because it is the focus of work by a young woman, Misako Ozaki (Ayame Misaki), who writes audio commentary for visually impaired filmgoers.

Kawase explained, “We did this [film-within-the-film] 20 days prior to shooting the actual film, then I asked Ms. Misaki to create her own voice guide for it. We shot the short in 2 days, and I had to change the way I made it so that voice guidance could actually be inserted. This forced me to rethink how I was shooting, to consider whether it would be appropriate for the guide to say something in between the [sparse] lines of the short film.”

The production was different from her usual approach, since Kawase demands the full attention of every member of cast and crew, and doesn’t stop shooting until she gets exactly what she wants. She called on Fuji, who had remained in the audience for the short screening, to comment on the experience of being on her set.

“It’s very particular, different from other sets, very quiet,” he responded. “But all the time, we need to be 100% prepared for when she’s ready to shoot. She always asks, ‘Are you ready to roll?’ Even when she’s already started shooting. It’s intense and it’s as if she has kidnapped our souls.”

Kawase admitted that her actors frequently find her intimidating and even “want to kill me at certain points. But afterward, they’re happy for the experience. Young actors memorize scripts and can say the lines again and again, but there must be something in their hearts or it won’t show on screen. As long as an actor is fully committed, the camera can capture it.”

The third and final screening of the afternoon was Kawase’s very first 8 mm work, shot 30 years ago in Osaka. She remembers that she felt immediately empowered, and enjoyed the experience immensely. But it wasn’t until she’d developed the footage that her real love affair with film began. Likening it to a time machine, it was then that she discovered “I could recapture how I’d felt when I shot the images, and preserve the self that I was 3 days ago.”

The acclaimed filmmaker also admitted, “I want my work to communicate to someone like me who’s sitting in the audience, whether that person is in Japan or at home.”
The Wolves of the East will open in Japan on February 2, 2018.