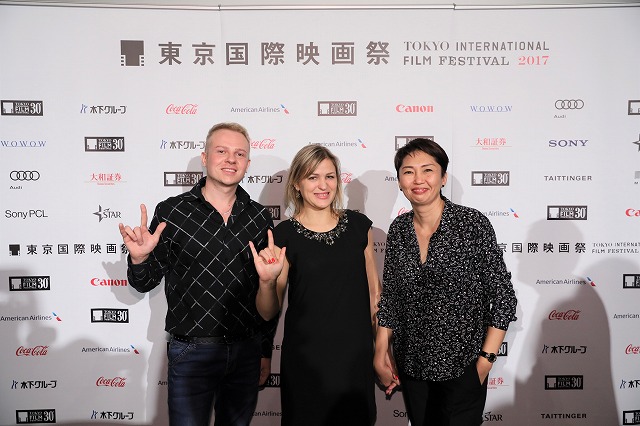 As with many films presented in the Competition section, the Kazakhstan feature Sveta expands on a universal social issue by dramatizing its effects in a specific national situation. The title character, played by newcomer Laura Koroleva, is a hearing-impaired foreman in a textile factory whose job is threatened by a cyclical loss of revenue. Saddled to a mortgage for her apartment and raising two children, Sveta panics. She grew up in an orphanage and understands how easy it is to slip through the cracks. She had struggled to reach a semblance of middle class comfort and is not going to give it up.

Sveta badgers her husband, Ruslan (Roman Lystsov), also deaf, who is too tired at the end of his own shift to process her desperation, and she takes it upon herself to ensure that they don’t lose their apartment and their comfortable lives. But how she solves this problem, and how she enlists her husband in her plan, is frankly horrifying.

The director, Zhanna Issabayeva, pointed out during a press conference following a screening on October 27, that the disabled in Kazakhstan have it harder than in other countries. Besides the fact that wages are lower in general, the hearing impaired do not receive special tax breaks or consideration when taking out a loan. In several scenes in the film, Sveta schemes to game the system because she knows that she is being taken advantage of. However, she invariably also takes advantage of her fellow disabled, including a little deaf girl who will end up in an orphanage just as she did, and Issabayeva doesn’t soften the blow. Sveta isn’t so much a cynic as she is a determined survivor, and the damage she does to others in securing her survival is devastating.

What’s striking about the movie is that, for all the emotional and even occasional physical violence, it is almost completely silent. Except for a few scenes involving public functionaries, almost all the interactions are between deaf people who communicate in sign language. Nevertheless, Koroleva and Lystsov convey a heated, credible model of a married couple in the throes of financial turmoil. Moreover, Sveta is a wholly believable anti-hero, desperate to the point of foolishness, but always exuding a palpable sensuality. At one point in the narrative, she explains that she was considered a “homely girl” in the orphanage, and she obviously is determined to overcome that kind of stereotype, even if it means the destruction of people who trust her.

All of the hearing-impaired actors in the movie are non-professionals. Koroleva was working at a cultural center for disabled persons, pursuing a degree at a local university, when the director discovered her. Issabayeva stressed that the fact she had insisted on using hearing-impaired actors made it very difficult to secure funding for the film. Nevertheless, she felt the movie couldn’t have been made with conventional actors.

“I went into the project thinking that hearing-impaired people were introverted,” she told the press. “But that wasn’t the case at all. They were very outgoing and passionate about the project.”

This passion was manifested dramatically, even during the press conference, when the two lead actors, struggling to make themselves understood through sign language and spoken Russian, had to stop several times and write down their thoughts on paper for the interpreter.

“It is my greatest pleasure to come to Japan to show you this film,” Koroleva said at the end with great emotion, and her costar added that he actually didn’t want to go home to Kazakhstan. “I want to stay here as long as I can,” he said via sign language.