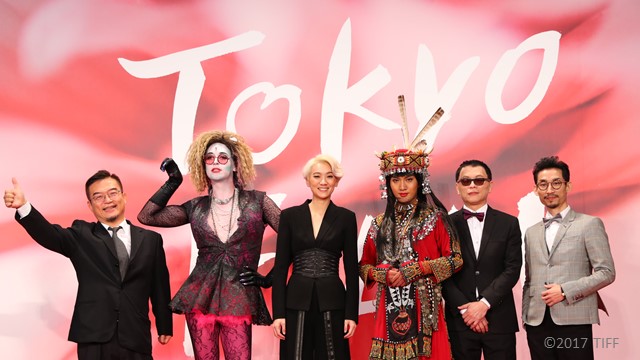 “Tomorrow is Gay Pride Day in Taiwan. Please join the parade and watch the film!” said Wang Yu-lin, the director of Alifu, the Prince/ss, another celebration of diversity from LGBTQ-friendly Taiwan. Wang was appearing after the world premiere of his third feature, screening in TIFF’s Asian Future section on October 27. Delving into such complex but significant issues as sexuality, ethnicity and alienation in the city, this story of a transgender protagonist who is a member of the indigenous Paiwan people looks for a way to intertwine tradition with something unconventional.

The narrative centers on the sexual and ethnic struggles of Alifu, a Paiwan hairdresser who dreams of becoming a woman. As the only surviving child of the tribal chief, who desires his “son” to inherit the tradition, Alifu faces an identity crisis that forces her to contemplate whether she should continue to be a city-dweller or to appreciate the tribal tradition, whether her sexuality should be hidden or allowed to come out.

Having said that, Wang’s feature also includes an unrequited romance involving a dying transgender woman and the family crisis of a governmental official who secretly works as a drag performer. Overall, Alifu, the Prince/ss presents three stories of love, diverse issues that queer figures are facing.

Revealing his inspiration for the film at the Q&A session following the sold-out screening, the director noted, “In my 20s, when I wanted to be a filmmaker, I suddenly realized that the world is not exclusively for heterosexuals, that there’s something different. I myself was a heterosexual, so I was curious why some people are into someone of the same sex.” When Wang was conscripted, he had the opportunity of getting to know a mystic in the army, who told him that there is no difference between men and women, that originally, people were are all simply human.

Another inspiration came from the Buddhist scripture of Konkokyo, a staying that struck his heart: “Everything visible is delusion.”

Despite its omnibus touch, Alifu’s identity struggle pulls the whole film together. According to the filmmaker, the issue of gender-transition among tribal communities is not fictional: “Among Taiwanese natives, there actually was a tribal chief’s son who hoped to change his sex. It was not acceptable for the father, not just because his own son desired to be woman, but also because it was someone who was going to be in the position of the tribal chief.”

Playing the leading role, Utjon Tjakivalid said he bore great responsibility in representing a transgender character. “I’m not an actor, so in the first place, it was challenging for me to act,” said Tjakivalid, “To approach this character, I met many sexual minorities who are facing similar difficulties and transsexuals who hope for a sex change. I felt this is the kind of role in which I am required to represent customs and manners of speech of sexual minorities properly, and not to give the wrong impression.”

In terms of LGBTQ rights, the situation in Taiwan is rapidly changing, as the court recently ruled in favor of same-sex marriage. Living in Taiwan for 8 years, Matt Fleming, who plays a drag performer in the film, shared this opinion: “The situation in Taiwan changes much faster than it does in Japan, in China or in England, where I’m from. Because we’re from very old countries, since the time we were young we’re used to a set lifestyle, and laws and society in culture change more slowly. So, when there is a big change like gay marriage, it’s more controversial. […] I really admire Taiwanese people, particularly because of their ability to adapt to new situations so quickly.”

The film starts off as a romantic comedy among city girls, but gradually reaches a point where alienation and loneliness dominate the psychology of characters. What happens at the ending is hurtful, but also hopeful. Zhao Yi-lan, playing Alifu’s lesbian roommate, says that she understands the ending as “hope for the future,” and we all wish that that doesn’t just stay on the screen.