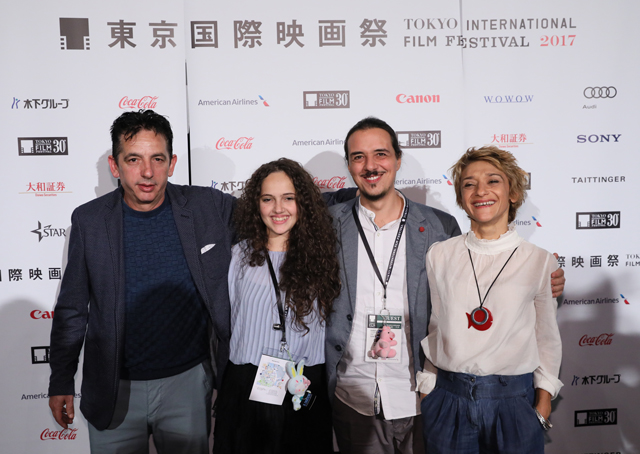 No other national cinema has been more associated with “neo-realism” than Italy’s, and Silvia Luzi and Luca Bellino’s Crater, presented in the TIFF Competition section, takes the idea of naturalist narrative cinema to its most obvious end.

Luzi and Bellino, who wrote the screenplay, wanted to film a real story about a real family living on the margins, and they found one in the Crater district of Naples: a couple who sells plush toys on the street and whose daughter acts as a kind of billboard for their wares. She is an accomplished singer, whose street performances attract passers-by. Based on this idea, Luzi and Bellino put together a script about a fictional family like these people who, in order to escape poverty, push their daughter to become a professional pop singer and in doing so, alienate her.

Favoring intense close-ups that force the viewer to come to terms with whichever character is holding the screen, the movie takes a rather dim view of the show-biz life, or, at least, as it works out for those who attempt to enter it from the bottom.

Rosario (Rosario Caroccia) forces his 13-year-old daughter, Sharon (Sharon Caroccia), into auditions and studio sessions that would try the patience even of an adult. But being an adolescent, she doesn’t fully comprehend the situation when she’s told that she isn’t “emoting” enough or perhaps is being too idiosyncratic as a vocalist. “You don’t sound as if you want to sing,” Rosario impatiently tells her at one point, purposely breaking her heart in order to get what the record producers demand. His control becomes so obsessive that he even installs closed-circuit cameras in their home so he can watch what she does. Considering Sharon’s natural talent, most of Rosario’s concerns come across as petty, but he keeps exerting pressure on his daughter until she reaches a breaking point — although the unsettling ending is ambiguous enough to keep the viewer guessing.

What’s extraordinary about the film, and also what makes it deeply discomfiting, is that this conflict between father and daughter is being played out by a genuine father and daughter. As Bellino told the assembled journalists after a press screening on October 27, “We started with a rough script, but we wanted realism, so Rosario and Sharon contributed greatly to the final film. We shot it chronologically, and whenever there was something that wasn’t genuine, Rosario or Sharon would point it out and we would make corrections. After all, Sharon knew better than anyone what it was like to be a 13-year-old girl.” The setting was real — the production used the Caroccia’s actual home — and the clothes were the actors’ own.

The whole point, according to the directors, was to make the audience feel they were watching a documentary. But Luzi was careful to add that the original idea was to show a “dysfunctional family,” so finding a real family that would go along with this mission must have been difficult. Nevertheless, Sharon, exuding a great deal of confidence in front of her first international audience (Crater is making its world premiere at TIFF), explained that her character is totally fictitious, and that in real life she is much more upbeat and positive than the Sharon we see on the screen. Similarly, her father said that he really got into playing himself as a different personality, and would often stop in the middle of a scene to ask the director if he could do another take in order to make it better.

“Actually, he’s being very humble,” Bellino said, and everyone on stage laughed.