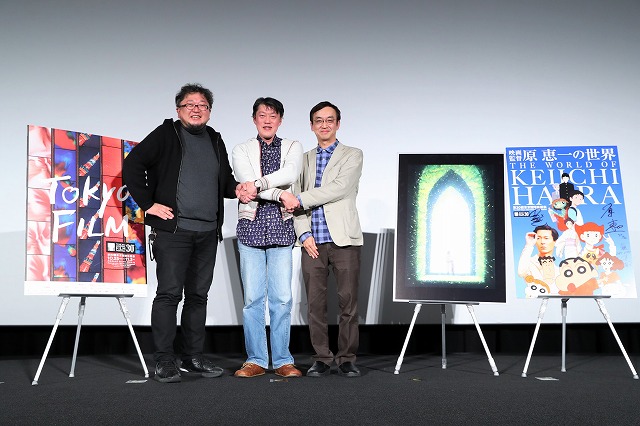 “I thought the fans might get angry, and that I might get fired, but I decided to do it anyway.”

So said anime director Keiichi Hara following the October 27 screening of his 2001 film Crayon Shin-chan: The Storm Called: The Adult Empire Strikes Back, part of the festival’s retrospective of his works, The World of Keiichi Hara, in the Animation Focus section.

Hara was joined on stage by anime critic and lecturer Ryusuke Hikawa and director Shinji Higuchi (Shin Godzilla) to talk about the movie that, in his words, “really changed my way of making films.”

By the time he made The Adult Empire Strikes Back, Hara, who had been in charge of the Crayon Shin-chan franchise since the mid-90s, and had directed all of its annual films, wanted a change.

“I felt like I was betraying Shin-chan, but at the same time, I really wanted to make a film like this,” the director said to a room full of anime fans.

Previous Crayon Shin-chan films had all been lighthearted parodies, but with The Adult Empire Strikes Back, Hara decided to use Japan’s 1970 World Expo, a touchstone event for his generation, to tell a tale about the dangers of nostalgia, what it means to be an adult, and the power of family — all while including plenty of the franchise’s signature fart jokes.

Hara revealed that the producers hated it and thought it would fail. Instead, the film was a hit with adults and children alike.

“It made me realize I’d been relying too much on the idea of what a Crayon Shin-chan film ‘should’ be. The experience made me more flexible as a filmmaker.”

While one of the themes of the film may be the dangers of nostalgia, the three men couldn’t help but reminisce about their experiences at Expo ’70. When Hara mentioned how impressed he was upon seeing the world’s first cellular phone at the expo, Higuchi let out a laugh, responding, “but you don’t even own a cell phone now!” Then he told the audience, “When I want to invite him out for a drink, I have to send him a fax!”

After The Adult Empire Strikes Back, Hara went on to direct or write several more films in the Crayon Shin-chan franchise, including The Battle of the Warring States, before going independent and helming films such as Colorful, Dawn of a Filmmaker and Miss Hokusai (all screening at TIFF, and all award winners at international festivals like the Annecy International Animated Film Festival).

Those who saw Hara walk the TIFF red carpet on opening day saw the director teasing his latest project, holding a T-shirt with a mysterious silhouette of a cat. After the Adult Empire Strikes Back screening, Hara finally revealed more details of that film, including an image of a young girl walking a bicycle through a mysterious passageway.

Hara hold Hikawa and Higuchi he’s not allowed to reveal too much else, but that the film is “a fantasy adventure” about “going from the real world to another world.” The director added that the film will also include “human relationships, humor, serious moments, and action.”

“Of all the films I’ve made so far,” he said, “this one includes the most ‘fan-pleasing elements.’ It will be a pure entertainment film.”

Finally, Hara revealed that he’s currently working on both storyboards and animation, and that the project is expected to be completed next year.

Hara fans will have to wait a little while longer for his latest, but in the meantime, they can continue to enjoy The World of Keiichi Hara through the end of TIFF.