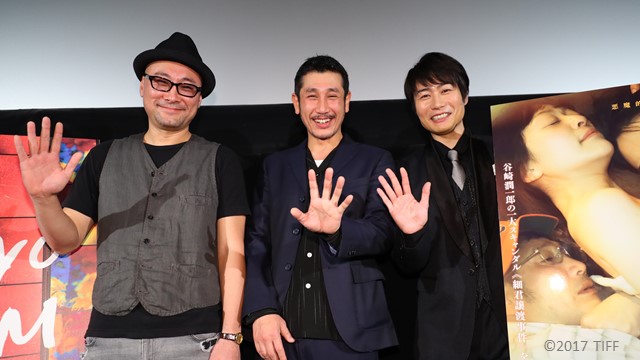 Readers of Japanese literary giant Junichiro Tanizaki will know of the writer’s penchant for twisted stories involving love triangles, S&M and fetishes of all kinds — presented with a playful, black comedy touch.

That makes Eiji Uchida the perfect filmmaker to adapt Tanizaki to modern day.

The director, known for his own sex- and violence-splattered black comedies (including Lowlife Love, which premiered at TIFF two years ago) is back with Between Men and the Gods, a modern-day adaptation of the Tanizaki short story of the same name.

The film stars Kiyohiko Shibukawa and Shigeyuki Totsugi as Hozuki and Soeta, two men from a countryside town who fall for the same woman, Asako (Chika Uchida).

As the story begins, Hozuki, a mild-mannered doctor, and Soeta, a struggling manga artist, somehow find themselves becoming fast friends despite their near-opposite personalities. But the two men find themselves pulled into a strange, perverse love triangle when Soeta marries Asako — who herself loves both men — and the two immediately take off for big-city Tokyo.

Unable to get in touch with the pair, Hozuki decides to pay them a visit, and discovers the newlyweds in anything but marital bliss. Not only does Soeta drink and spend too much, he’s sleeping around, prompting Hozuki himself to move to Tokyo in a clumsy attempt to rescue Asako that lasts years, as she and the two men enter a strange, co-dependent and ultimately destructive relationship.

It may not sound exactly like a barrel of laughs, but the humor comes from the twisted relationship between the three main actors. The two male stars, Shibukawa and Totsugi, appeared with director Eiji Uchida for a Q&A session following the premiere at TIFF on October 26.

The discussion quickly turned to the transformation that Shibukawa, best known for playing cool antiheroes (such as in Uchida’s own Lowlife Love) went through to play straight-laced country doctor Hozuki, whose distinctly uncool style got as many laughs as any line of dialogue.

“The film was shot on a tight schedule, and I had to speak in a way that was very unnatural to me. There were a lot of lines, too, so it was really tough,” Shibukawa told the audience.

Totsugi, who plays the womanizing, destructive Soeta, assured the audience to laughter that he, too, is nothing like his character in real life.

Director Uchida admitted he wasn’t sure the two male leads would work well together, and that the atmosphere on-set was much different from that in the completed film, but that in the end, it turned out to be a great pairing.

It was also revealed that Between Men and the Gods is the first in a three-film project called the Tanizaki Tribute, in which the directors themselves choose which Tanizaki story to adapt. Asked why he chose this particular story, Uchida answered that while Tanizaki has many famous long-form novels, he was attracted to the writer’s short stories, and that of those short stories, “Between Men and the Gods” — which is based on Tanizaki’s own life — was perfect for a project that pays homage to the man himself.

Finally, asked to reminisce about a love triangle from their own lives, the director and actors struggled, until Totsugi offered up one example: “In my case, there’s a love triangle between myself, my son and my cat.”

It sounds as if, for better or worse, the love lives of the men behind Between Men and the Gods are not nearly as complicated as those of Tanizaki’s characters.

Between Men and the Gods will be released in Japan in January 2018.