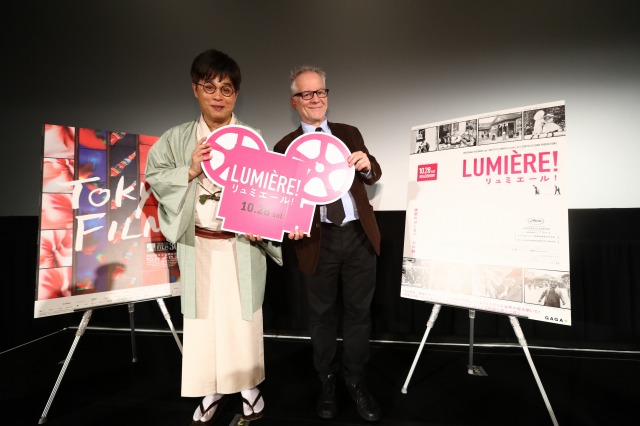 In 1895, two Lyonnais brothers, Louis and Auguste Lumière, were running a photographic plate manufacturing business with their father, Antoine, and decided to test out the prototype of a new movie camera they were developing. They took their Cinematograph, planted it in front of their factory and filmed workers as they left at noon. And the rest is history.

The Lumière Brothers are now credited as the fathers of cinema, and their 50-second Workers Leaving the Lumière Factory is considered the first true motion picture. They would go on to train and a few years later, to dispatch cameramen all over the world (including Japan), and to document a dizzying variety of cultures and scenes in the early years of the 19th century.

Some 120 years later, Thierry Frémaux, director of the Cannes Film Festival and the Institut Lumière in Lyon, France, is honoring the Lumière legacy by bringing their vision to modern audiences, while also providing an excitingly revisionist interpretation. For Frémaux, Louis Lumière is not just an inventor but an innovator — nothing less than the true first director in the history of cinema, the man who committed the “founding act” of film.

Frémaux has selected and restored 108 short (50-second) Lumière films, out of a staggering 1,422-work oeuvre (including many that have heretofore been unknown) shot by Lumière and his cameramen between 1895 and 1905, and created the 90-minute 4K digital celebration Lumière!

The films are all silent, of course, but Frémaux’s delightful tribute includes an expressive musical score comprised of work by the French composer Camille Saint-Saens, and in the original version of this film, a spirited, knowledgeable commentary narrated by Frémaux himself. The Japanese version has been narrated by Japanese Shiraku Tatekawa, famous for his commentary on gourmet cooking programs on TV.

Appearing before the Asian premiere of his film at TIFF on October 26, Frémaux explained, “There are three ways to watch a silent film: silent silent, silent with music, and silent with commentary. The commentary I made is a way to bring you into this world. I love it when someone explains to me a Beethoven symphony or a Picasso painting or a Mark Rothko abstract, and I thought it was necessary for the audience to know something about what these films were. I chose Saint Saens because he was a contemporary of the Lumière Brothers, and the music fits the time period.”

Tatekawa Shiraku, attired in elegant kimono, joined Frémaux on stage and admitted, “I had never done a narration for film, although I’ve been doing commentary on television. I’ve also been writing my column for 20 years in [cinema magazine] Kinema Jumpo, so I knew the name Lumière, but I didn’t know their work. The Japanese usually associate Thomas Edison with the birth of film. I didn’t imagine it could be interesting, but when I saw the footage, I was blown away. I was engrossed for 90 minutes.”

Frémaux joked, “Technically, Edison could have invented cinema, but instead he invented a small box, the Kinetoscope, where just one person could pay to see the image. And that’s still the American way. But Lumière chose to take the image and put it on the big screen and project it in front of a crowd. So Edison invented this [he held up his smartphone], but we still love going to cinemas.”

After the audience applause died down, Frémaux acknowledged, “Even in France, these films were not really known and we had to teach people about them. I feel like I’m on the same path as the Lumière cinematographer who came to Japan 122 years ago. Because cinema was a big adventure, and Lumière sent out cinematographers to bring the world back to us. Today it’s the same adventure to bring Lumière back to the world, to tell audiences everywhere that cinema was invented in Lyon, France.”

How did he choose the 108 films to use in the film, and was there any special timing to the project? Said Frémaux, “Two years ago was the 120th anniversary of cinema, so we started [the restoration project] then. We wanted to bring Lumière back into the theaters. We are now living in digital civilization, and it’s easier to restore films. We’re lucky to have big financial help from the CNC (Centre National du Cinema), the French government, and we’re en route to restoring all the films now.”

Lumière! proves, for the first time ever, that Louis Lumière, who operated the camera, and his brother August, who often acted in front of it, were actually the first creators of mise-en-scène, rather than just having randomly shot scenes, as has been commonly thought.

The film provides ample — and often, thrilling — evidence that they paid very careful attention to the staging, framing, lighting, perspective and camera movement. Mounting cameras on elevators, trains, boats and other contrivances, they captured a viewpoint that no one had ever experienced. Beginning with many films shot in Lyon, but later incorporating sequences from Paris, England, America, Martinique, Turkey, Spain, Tunis and beyond, the Lumière style varies from ethnographic documentary to staged comic sketch and even to what could be the first-ever on-screen stunt, involving a man being run over by an automobile (before he’s reassembled and revived before our eyes).

Frémaux’s commentary is as enlightening as the visuals, pointing out what we should be noticing, identifying groundbreaking moments in this new art form, and explaining what took place behind the scenes. Lumière, we learn, was a master of framing and camera placement, but also of orchestrated performances (often overacted for comic effect., Frémaux also suggests he and/or his cameramen are responsible for the first-ever close-up (10 years before D.W. Griffith), the first depth-of-field shot, the first moving and tracking cameras.

“There were a lot of inventors before Louis Lumière,” concluded Frémaux, “but none after him. After he invented cinema, cinema was cinema. So he’s the last inventor and the first director. The meaning of lumiere is light, so it’s the perfect name to invent cinema. And the neighborhood where he invented it is called Mon Plaisir, which means my pleasure. Also perfect.”