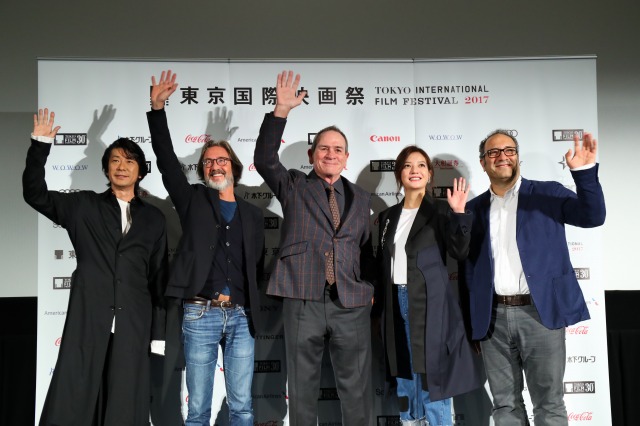 The five members of the 30th TIFF International Competition jury sat down with the press on October 26, the morning after they had first appeared together at the Opening Ceremony.
Presided over by the outspoken American actor-director Tommy Lee Jones, award-winning star of over 80 films (including the Men in Black series and The Fugitive), the jury is a global village, hailing from Iran, France, China and Japan. Noting that “We don’t represent the entire world, but we don’t represent one particular place, either,” Jury President Jones went on to say, “We’re all very happy to be here. It’s an honored occasion for each one of us, and we are looking forward to films that are finely crafted and make an impression on us.”
Iranian director-writer-producer Reza Mirkarimi followed up: “I was at this famous festival and beautiful land a long time ago as a filmmaker” (his first film, Under the Moonlight, won the Best Director’s Award and the Special Jury Prize at TIFF in 2001). “Judging is much harder than filmmaking in my point of view, but I will look for cinematic value first and foremost.”

Popular Chinese actress-director Zhao Wei, who rose to international stardom in Stephen Chow’s Shaolin Soccer, John Woo’s Red Cliff and Johnnie To’s Three, said, “I’m happy about the diversity of the selection and the richness of the genres represented. I look forward to embarking on this cinematic adventure with the jury as well as the audience, and to find the best films together.”

Masatoshi Nagase, one of Japan’s handful of internationally known actors, having appeared in American, Icelandic and Hong Kong films (as well as winning 10 acting awards at home over the years), commented, “Fifteen titles have been selected, and that in itself proves that they’re all wonderful. I need to be careful that I don’t choose all 15 for the Grand Prix. I look forward to enjoying cinema while working together with my colleagues. We all bring the perspectives of both the audience as well as filmmakers to our task, and I believe that’s helpful.”

“I’m happy to be back and representing my country,” said French director Martin Provost (Seraphine, Violette). “Judging is very difficult, but I want to be as objective as possible and to think about what’s behind each film. I look forward to films that shows us what’s happening in the world and introduces us to different worlds.

The 15 films in the main competition, selected out of 1,538 titles from 88 countries and regions, are vying for the Tokyo Grand Prize, Jury Prize and acting awards. Asked what type of criteria would guide their selection for the awards, whether theme, social statement or well-honed craft, Provost commented, “It’s a difficult question to answer, but I would like to forget that I’m a member of the jury. If the film is good, it will resonate with me.”

Nagase agreed with him, adding “I think it depends how much I’m moved by the film or how amazed I am. I look forward to discussing these feelings with my colleagues.” Mirkarimi responded, “I will focus on the cinematic value of the film, as well as the story;” while Zhao said, “I’ll be looking at the story, visual expression, how well it’s crafted and where the film takes me.”

Jones concluded, “We have five different points of view that are the same. We’re all expecting good film craft. All the things that make a film coherent are what we live for, along with the human factor. I think we all have a deep, sincere interest in the commonality of human intellectual and emotional life.”

Asked for a definition of film in one word, the jury exchanged bemused glances before responding. Jones kicked it off by joking, “If cinema could be reduced to one word, none of us would be rolling our cameras.” He then suggested that everyone refer to a scene in Jean Luc Godard’s Pierrot le Fou, in which director Samuel Fuller appears and defines cinema.” [Fuller says: “Film is like a battleground. Love. Hate. Action. …emotion.”]

Mirkarimi said: “The same way that you can’t describe life in one word, you cannot describe cinema.” Said Nagase, “I believe in the potential of cinema in the past, present and future. I have complete faith in it.”

Speaking like true cineaste, Provost recalled, “When I was 15, I saw Ingmar Bergman’s Cries and Whispers, and it was an awakening for me. So I believe cinema should be an awakening.”

Jones then jumped back in, just before the conference ended, speaking like a true American: “I actually do have one word: money.” As the rest of the jury broke into laughter, he said, “You have to spend a lot of it to make a film.”