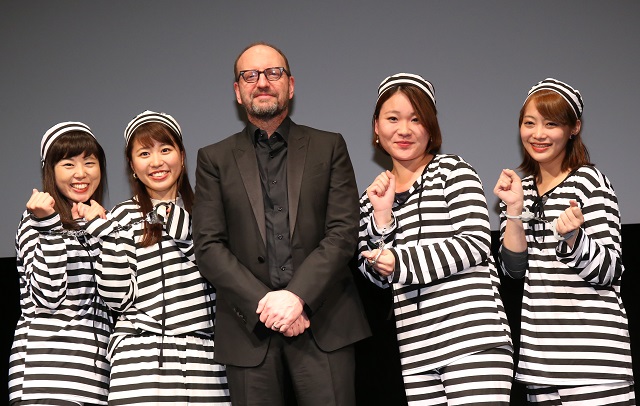 We should never trust the retirement announcements of artists, because their creative energies will not allow them not to express themselves. This is exactly what happened to American master Steven Soderbergh, who announced in 2013 that he’d had enough, and moved into making TV series. The youngest Palme d’Or winner ever for Sex, Lies, and Videotape in 1989 is a creative genius who brought us such feel-good movies as Erin Brockovich and Ocean’s Eleven, and art-house favorites as Traffic and Che. In 2017, Soderbergh finally broke his four-year filmmaking break, as everyone had expected, by introducing a new feature, Logan Lucky.

Soderbergh appeared before the Japan premiere screening of his new film in the Special Screenings section on October 31, and began by wishing the festival happy birthday.

Soderbergh’s first trip to Japan in six years was possible owing to American Airlines, which has just launched a collaborative program with TIFF to highlight the work of filmmakers from the Americas. The World of Steven Soderbergh is celebrating the comeback of this American auteur with three early works, plus his comeback, Logan Lucky.

At the stage appearance before the screening, Soderbergh revealed an early fascination with Japanese culture: “I was first exposed to Japanese culture by watching Japanese cinema. Immediately, even as a young teenager, I found it very compelling.”

What the filmmaker did to expand his knowledge was to get hold of everything that Donald Richie wrote, a legendary American film historian and author, who is credited with introducing Japanese film to the West. Being a big fan of Richie’s writings, Soderbergh even read quotes aloud in front of the audience, such as: “While Western plot stresses occurrence, causality and responsibility, Japan’s traditional narrative emphasizes sequential flow, connection and association.”

This quote motivated the filmmaker to become the filmmaker that he is today. According to Soderbergh, “What I realized was that I was interested in both of these [approaches], and that I would spend all of my career trying to force these two attitudes to be married.”

Soderbergh’s latest feature, Logan Lucky is closer to the former narrative type in Richie’s description: a Hollywood-style cause-and-effect narrative. The protagonists are two loser brothers who assemble a gang of convicts and family members to rob cash galore from a vault during a NASCAR race in North Carolina.

Even right after his four-year break, Soderbergh managed to attract interest from the hottest megastars in Hollywood, including Channing Tatum, Adam Driver and Daniel Craig. Reminiscent of the star-studded the Ocean’s series, Logan Lucky proves that Soderbergh’s directorial power has not declined at all, successfully making this delightful ride funnier, cleverer and more amusing.

Fervent fans in the fully-packed Roppongi EX Theater seemed to be charmed by Soderbergh’s wit and intelligence. As the director said, “I feel tonight’s attempt is successful if only because there is laughter and this is always a good sign for a relationship.”

On a closing note, Soderbergh bestowed another witty comment on the audience, who were just about to watch the film: “Life can feel very short sometimes. At the same time, two hours can feel very long. I hope in this case it will pass very quickly.”