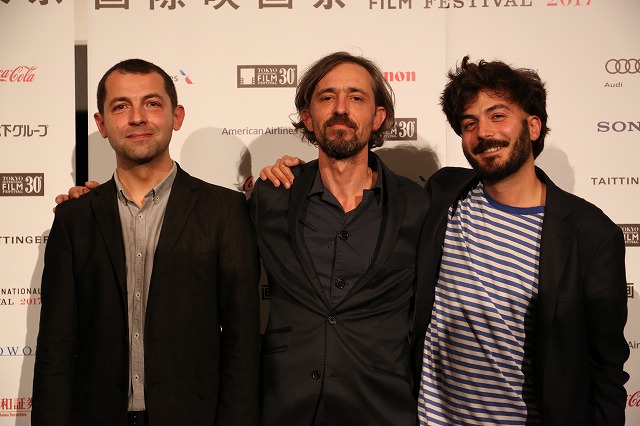 Bulgarian writer-director-editor Lyubomir Mladenov and stars Tzvetan Alexiev and Ivan Dimitrov were in Tokyo on October 26 to answer questions following the world premiere of their film SHIP IN A ROOM, playing in TIFF’s Competition section.

The gritty and minimally worded film follows the equally reticent Philipp (Alexiev), a cameraman who spent part of an energetic youth photographing conflicts in Lebanon, but whose inspiration has left him. While attempting to take pictures of a crowded opening for a local supermarket, he ends up befriending Pavla (Elena Dimitrova), who is being forced out of her flat. He reluctantly offers a spare room in his public housing complex to her and her brother, Ivan (Dimitrov), who is so severely depressed that he barely speaks and is often heavily sedated. Ivan has not left his apartment in over a year, content with building model ships to fill his waking life.

Philipp soon takes an interest in coaxing Ivan out of his state, and begins to record quotidian sequences around town for Ivan to watch on a projector in an improvised movie theater created in a spare room. Ivan slowly becomes a cinephile, attending Philipp’s screenings on a regular basis. “Rather than focusing on the images for their dramatic purposes,” said Mladenov, “I wanted to show these images as they were. What I wanted to express through them is the feeling of facing reality when, for example, you’re on a train and sitting across from someone. If Ivan can see that person illuminated in front of him, he can experience reality again. What is important to me is to express and feel that reality as it is.”

Philipp’s fixation with Ivan transforms his own subject matter from an obsession with the mundane to a quiet celebration of the beauty and rhythm of everyday life. “I think there was a meaning in Philipp encountering Ivan, which meant that he had to look within himself,” said Alexiev.

Asked whether the relationship was one of father and son, the two actors offered different perspectives based on the characters they played. “Rather than father and son,” said Alexiev, “I think it was more important that Philipp actually imagine and think of Ivan’s situation from the perspective of Ivan rather than his own.”

“I do think Ivan views Philipp as a sort of father figure,” Dimitrov countered, “especially as Philipp has accepted both Ivan and his sister into his house.” The actor also expressed the idea that most Western friendships between men have some kind of father-and-son element to them. “In the past, there was a ritual where the father talks to his son and the boy becomes a man,” he said, “but we no longer have this ritual today.”

All three felt that there was a special meaning behind their film premiering in Japan. “I’ve been all over the world, but Japan is the only place where I wanted to return,” said Mladenov, who believes that his film’s premiere at TIFF is no coincidence, citing a special “connection” he has with Japan. “I feel there is something hidden here,” he said. “Perhaps Europe has lost whatever this quality is, and I feel it again when I am here.”

Alexiev said his experience with Japanese martial arts at a young age left a notable impression on him. “I did Kyokushin Karate as a student and am also interested in Japanese history,” he said. “Because of that experience, I think I have built up a capacity of being stoic and listening carefully to others, so I’m very grateful to Japan.”