Following an overview of festival highlights from Takeo Hisamatsu, Festival Director of the 30th TIFF, Japan Now Programming Advisor Kohei ANDO unveiled an impressive roster of directors and stars, who are expected to appear for Q&A sessions after their Japan Now screenings at the festival.

In this 30th TIFF anniversary year, the Japan Now section is spotlighting four of Japan’s most captivating actresses and films featuring them, in the Muses of Japanese Cinema. Two films for each actress have been selected, and the actresses and their directors will hold talk events during the festival. Seven more films will be shown in Japan Now, which highlights the year’s most important Japanese films.

Acclaimed director Naomi Kawase, whose films have been selected for Cannes seven times, among other festivals, also appeared as a special guest at the press conference. She will also appear for a Japan Now Q&A session and a Master Class during TIFF.

Over the 10-day celebration, more than 200 films will be screened, with unique film-related events every day at the festival venues, including stage appearances, Q&A sessions and symposia featuring celebrated guests from around the world.


Notes and Quotes from the Press Conference

Takeo Hisamatsu, TIFF Festival Director
Let me say a few words about the Japan Now section, which plays a quite important role in the festival. This is the third edition and in the past two years, the section has focused on directors. This year we are highlighting four actresses who have inspired directors. Sakura Ando, Yu Aoi, Hikari Mitsushima and Aoi Miyazaki have been chosen as the Muses of Japanese Cinema. I hope you will enjoy outstanding Japanese films from this year and past years in Japan Now.

Kohei Ando, Japan Now Programming Advisor
TIFF has always tried to include the brilliant films of auteurs like Kore-eda Hirokazu and Naomi Kawase in the past, but because of the timing of the festival, late in the year, they always appeared at Cannes and other earlier festivals. This is why we created Japan Now: to showcase their work each year, without having a world premiere. Ms. Kawase’s film Radiance is such a beautiful film, and you can really sense the essence of Japan in this work.

Naomi Kawase, Director
Film festivals are such hard work, as I know from organizing the Nara International Film Festival, which will turn five next year. So I want to congratulate TIFF on its 30th anniversary, because that’s a major accomplishment. Film festivals are very much like life and very much like filmmaking: we have to overcome so many hurdles, and we do to survive. Festivals are platforms for people from all different backgrounds to come together, and then return to their home countries, and then come together again at a different venue. They help us overcome cultural differences and they motivate me as a filmmaker. I do not separate my life from my filmmaking. At my TIFF Master Class, I would like to share my own experiences with emerging filmmakers, and talk a little about one might do to fuse our lives with our filmmaking.

Naomi Kawase
Naomi Kawase made her theatrical debut in 1997 with Suzaku, which made her the youngest winner of the Camera d’Or at the Cannes International Film Festival. In 2007, she won the Cannes Grand Prix with The Mourning Forest, and received the Golden Coach lifetime achievement award in 2009 for her contributions to the festival. In 2013, she was selected as a member of the main competition jury and became President of the Jury for the Cinéfondation short films section in 2016. Sweet Bean, released in 2015, was a box office success throughout the world. While she continues to direct feature films, she is expanding her activities, directing TV commercials as well as writing essays. Kawase also focuses on mentoring young filmmakers, by organizing the Nara International Film Festival, which is held in her hometown.

Japan Now section
The Japan Now section was created in 2015 to showcase outstanding Japanese films from recent and coming months, demonstrating the diversity of the domestic film industry, as well as providing a multifaceted look at the country today. In the past two years, the section has focused on directors Masato Harada and Shunji Iwai. To celebrate our 30th anniversary, we will highlight the work of four iconic actresses in this year’s Japan Now section. Sakura Ando, Yu Aoi, Hikari Mitsushima and Aoi Miyazaki have been chosen as the Muses of Japanese Cinema in honor of the powerful sparks they generate on screen, their collaborations with renowned directors and their increasing international stature. 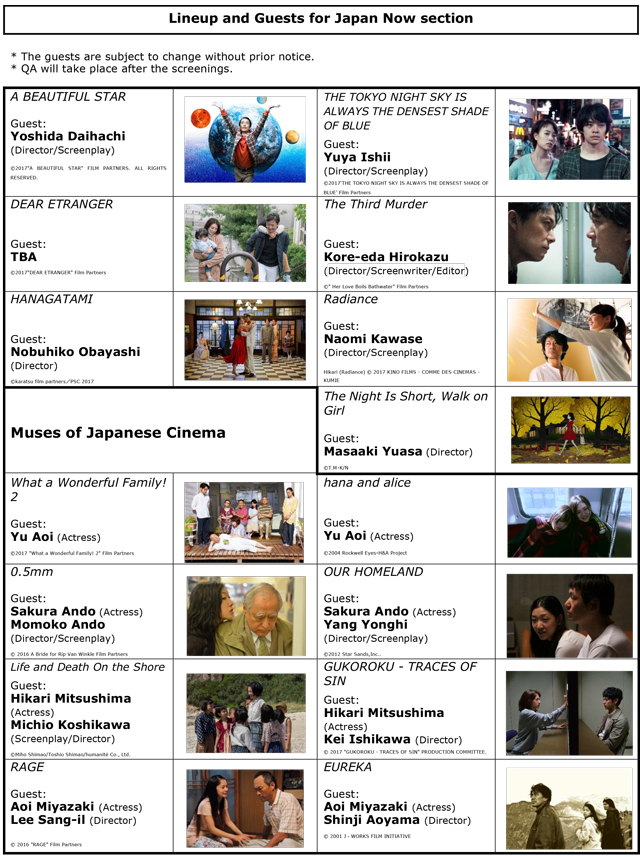