With award-winning director Nobuhiro SUWA as the lead mentor, students will develop a script, shoot and edit it with professional filmmakers and crew in Daikanyama, Tokyo from late July to late August, 2017.

The completed film will have its world premiere at the 30th TIFF, to be held from October 25 to November 3, 2017. 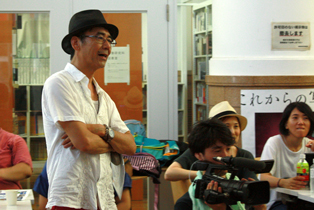 A Hiroshima Prefecture native, Nobuhiro Suwa began working as an assistant director on independent films while studying at Tokyo Zokei University. In 1997 he made his feature film debut with 2/Duo, starring Hidetoshi NISHIJIMA, which won the NETPAC Award at the Rotterdam International Film Festival. His second feature, M/OTHER (Mother) won the prestigious FIPRESCI Prize at the 1999 Cannes Film Festival. Other major works include H/Story, Paris, je t’aime (an omnibus film), Un Couple Parfait (special Jury Award at Locarno International Film Festival) and Yuki and Nina. He is known for his use of improvisation. His new film, starring Jean-Pierre Léaud, Le lion est mort ce soir, is set to be released in 2017.