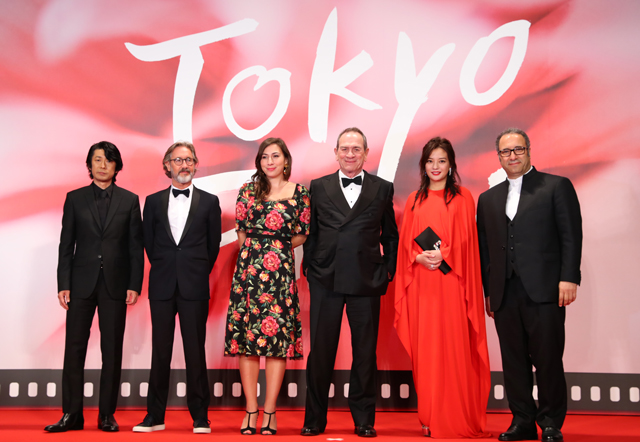 A light drizzle did little to deter hundreds of movie fans assembled in Roppongi, Tokyo October 25 to witness the opening day of the 30th Tokyo International Film Festival (TIFF). Producers, directors, and actors from Japan and around the world were on hand to represent their films, sign autographs and help ring in TIFF’s third decade as one of Asia’s premier film festivals.

The Red Carpet event began with the appearance of Festival Ambassador Kanna Hashimoto, the singer and actor known for her roles in films like Gintama and Psychic Kusuo, accompanied by Festival Director Takeo Hisamatsu.

Next, actors, directors and other guests began to make their way down the red carpet. Followers of the legendary Alejandro Jodorowsky let out cheers for his son, Adan Jodorowsky, star of the Special Screenings section’s Endless Poetry, who was joined on stage by a troupe of dancing skeletons. Fans of Japanese film were thrilled to spot director Naomi Kawase, whose Radiance is playing in the Japan Now section and who will host a special master class during the festival.

Among the dozens of other guests on hand were the cast and crew of Asian Future section film Someone from Nowhere, represented by director Prabda Yoon; director SABU and star Chang Chen of international co-production Mr. Long; the cast and crew of MIKO GIRL, including popular actors Lily Franky and Alice Hirose; director Teemu Nikki and actor Matti Onnismaa of Competition section film Euthanizer; the subject of this year’s Special Focus on Japanese Animation, director Keiichi Hara; and even everyone’s favorite Pokemon, Pikachu, celebrating 20 years of Pokemon animation.

The audience also gave a rousing reception to the Competition Jury President, Academy Award-nominated writer and director Tommy Lee Jones, who previously attended the 18th edition of the festival with his film The Three Burials of Melquiades Estrada.

The action then moved to the Opening Ceremony, and after remarks from Hiroshige Seko, Minister of Economy, Trade and Industry, and Yoshimasa Hayashi, Minister of Education, Culture, Sports, Science and Technology, visitors were treated to a special video showcasing highlights from the past three decades of the festival.

Introduced next were the festival’s four official Muses of Japanese Cinema, Sakura Ando, Yu Aoi, Hikari Mitsushima and Aoi Miyazaki. Ando remarked about how rare it is for the four actresses, who all hail from the same generation, to share the same stage.

Added Miyazaki, “I hope there’s a director out there who would like to use all four of us together in his or her film!”

Aoi rounded out the comments from the muses by talking about the power of film festivals: “It’s wonderful that people who don’t know each other can get together and share an atmosphere like this.”

Visitors were next treated to a 10-minute presentation of footage from the largest Japan-Chinad co-production in history, Legend of the Demon Cat.

“This was the first time I’ve had a chance to see the footage myself, and I was overwhelmed,” said star Shota Sometani of the epic international production directed by Chen Kaige.

Next, the Competition Jury were introduced, as Jury President Tommy Lee Jones remarked: “We’re all very happy to be here in Tokyo on this honored occasion.”

The writer and director added that while the Asian film market is sometimes referred to as the Pacific Rim, “I am honored and proud to be part of a film festival jury that intends to celebrate emotion and intellectual understanding between people, and stand at the heart, not at the rim, of filmmaking.”

Finally, just hours before its world premiere, guests were given a look at the trailer for FULLMETAL ALCHEMIST, the first Japanese film to open TIFF in a decade.

Said director Fumihiko Sori, “20 years ago, Titanic opened the 10th TIFF. As it happens, I participated in that film as an animator. I remember James Cameron and Leonardo DiCaprio standing here on stage, and I could never have imagined that 20 years later I’d be standing here with my own film. It’s like a dream come true.”

The 10-day film Tokyo International Film Festival will be showcasing over 200 films from Japan and around the world, plus unique film-related events, including stage appearances, Q&A sessions and symposia featuring celebrated guests.

The 30th Tokyo International Film Festival runs until November 3, 2017 at Roppongi Hills, EX Theater Roppongi and other venues in Tokyo.