The Tokyo International Film Festival (TIFF) today announced the lineups in all sections, as well as the jury members, and highlights of this year’s 30th anniversary edition. 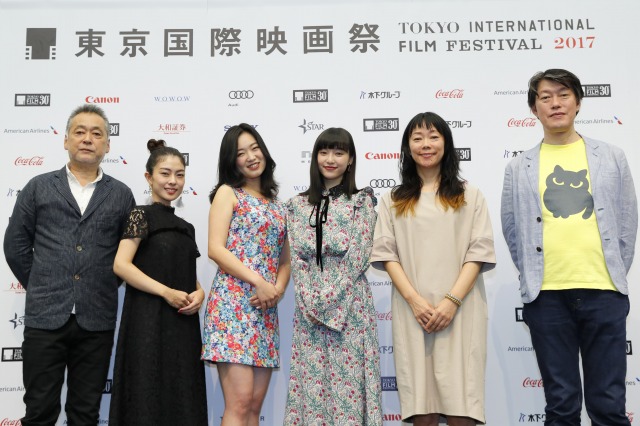 At a press conference at Roppongi Academyhills in Tokyo,Festival Director Takeo HISAMATSU, presiding over his first TIFF,delivered opening remarks and emphasized the festival’s vision for the future. The Opening, Special Opening Presentation and Closing Films were introduced. TIFF’s programing directors then took the stage to introduce the lineup for each section of the 30th edition.

In the Competition section, 15 films were selected from among 1,538 titles from 88 countries and regions. Guests from the two titles representing Japan, director Takahisa ZEZE and actresses Ayano MORIGUCHI, Kokone SASAKI and Aina YAMADA, from The Lowlife, and director Akiko OOKU from Tremble All You Want, were welcomed on the stage and made remarks.

More information of the jury members for the Competition and other sections.

Marking the 100th anniversary of Japanese animation this year, renowned director Keiichi HARA chosen in honor of his exceptional body of work for The World of Keiichi Hara in the Animation Focus section, greeted the audience after the retrospective lineup was announced. He will appear at panel sessions with special guests following his TIFF screenings.

The full lineup for The World of Keiichi Hara.

During the 10-day celebration, over 200 films will be screened and there will be unique film-related events every day at the festival venues, including stage appearances, Q&A sessions and symposia featuring celebrated guests from around the world.

Notes and Quotes from the Press Conference
Takahisa ZEZE, director, The Lowlife, Competition Section
This film is based on a novel by an actual AV (adult video) actress. When they hear the word AV some people have a biased view, thus I’m grateful that the film was selected. The film isn’t about the backstage goings-on in the industry, but the day-to-day life of these three women, their relationships with families and friends. In the past, the AV industry was outside most people’s lives, but now it’s closer to us, so I thought it was a good thing that I could depict these women as normal people. I always create a film hoping that even one person will enjoy and value it, including the positioning of adult films. I feel close to TIFF; I was a jury member and had other films shown here. I think what’s most important for film festival are the encounters and exchanges with people and films from around the world. I believe movies are freedom, so I hope this festival will serve as a protector of freedom.

Akiko OOKU, director, Tremble All You Want, Competition Section
I’m so happy to be able to participate in such a prestigious festival with my really modest movie. When I heard we got into TIFF, I was astonished. I always hope my films will be important and indispensable for someone, but I don’t have great expectations. I feel strange standing here, since I always used to come as an audience member. I went to film school and used to always be critical of film festivals. But I’m sure there will be a lot of young people like that in the audience, but those views are the best way to nurture a festival.

Keiichi HARA, director, The World of Keiichi Hara in Animation Focus
What a great opportunity to have all my past work shown. I’m greatly honored. All the works chosen are important to my career and I feel equally close to them, but Crayon Shin-chan: The Storm Called: The Adult Empire Strikes Back was quite a turning point. Even though it was a children- and family-focused film, I wanted everyone to take something from it. But since the main character doesn’t survive, I faced a lot of criticism from the TV industry. But the original author read the script and approved of it. I’m looking forward to reactions from the international audience who watch the film. I never thought I’d have this chance to participate in TIFF, since it’s mostly live-action films. I don’t think TIFF needs to create a separate section for animation, but I do hope many animated films can be included in the Competition in the future.

Speakers’ Notes and Quotes from the Press Conference
Takeo HISAMATSU, Festival Director, 30th TIFF
I’m confident that we have a quality series of films. For this 30th anniversary year, we are looking back to our past as well as enhancing our vision for the future. We have enriched our existing sections and also added exciting new sections. The program is really well balanced in terms of art and entertainment, from new films by emerging filmmakers to classics that have been digitally restored. We also have a new award, the Tokyo Gemstone Award, to honor up-and-coming actors and actresses in the festival. We hope to contribute to the empowerment of filmmakers as well as filmgoers, and we look forward to your continued support and involvement.

Yoshi YATABE, Competition Programming Director
We selected 15 titles for the Competition, and we have a large number of world premieres. The tendency we have seen this year, compared to last year, is that there has been a shift in focus from social issues to individual stories, especially stories about females and males struggling with life. We have a film set in the mafia world of Naples, an erotic thriller, a black-and-white science fiction film, a work that is 90% in sign language, and a love story set against the Rohingya crisis. The two films from Japan are quite different from each other, but make a nice juxtaposition.

Kohei ANDO, Japan Now Programming Advisor
In this section, we’re focusing on films that represent Japanese culture and values today, introducing them to international audiences. We have the four Muses of Japanese Cinema and we’ve chosen two films to screen for each actress. There will be talk events with the actresses and their directors. Seven more films will be shown in Japan Now, including the latest releases from such well-known names as Hirokazu Kore-eda and Naomi Kawase. The directors will appear for Q&A sessions after the screenings with many of their stars.

Kenji ISHIZAKA, Asian Future Programming Director and CROSSCUT ASIA section
This is the fifth year for Asian Future, which features new films from young directors around Asia and the Middle East. There is a lot of diversity in style and subject, including an LGBT story set in a traditional community, and a historical musical. Out of 10 films, eight of them are world premieres. Because Asian Future has become quite well known, these films go on to be widely shown internationally. Our goal in the selection is to capture the spirit of today’s youth, and we hope that you will be the first to tweet about your film-going discoveries at TIFF and let the world know. These are all young, up-and-coming, enthusiastic filmmakers and I hope you give them your support.