The Tokyo International Film Festival (TIFF) today unveiled the main visual of this year’s Special Focus on Japanese Animation: The World of Keiichi Hara.
The deluxe visual consists of the main characters of his past works. 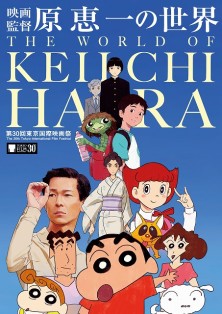 
In addition, we are pleased to announce that a special guidebook will be given to each Animation Focus screening audience during the festival. Ryusuke Hikawa, the Programming Adviser of the Animation Focus section, provided the text for this 36-page full-color guidebook, which includes a long interview with Hara and descriptions of the films being screened at TIFF, among other content.

The full line-up of The World of Keiichi Hara will be announced at our press conference on September 26, 2017.
Keiichi Hara Profile
Born in 1959, Keiichi Hara worked on a number of hit family shows before shifting to independent filmmaking and more personal projects. Summer Days with Coo (2007) and Colorful (2010) both received awards at the Japan Academy Prizes. His latest film, Miss Hokusai (2015), has earned international critical acclaim.
previous
30th Tokyo International Film Festival...
2017.09.16 [Updates]
next
Ryuichi Sakamoto to Recieve 30th Anniv...
2017.09.22 [Updates]
Return to List of News
Recent News